Home / Canola Watch / Who should use clubroot-resistant canola? 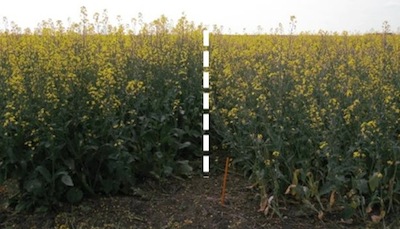 Clubroot resistance is an important part of clubroot management, and growers are advised to start using clubroot-resistant varieties as soon as clubroot is identified in their area. This will help keep clubroot at low levels in fields, and reduce the risk of selecting for resistant clubroot races.

Using resistant varieties only after clubroot is well established in a field could greatly reduce the useful life of that resistance gene. Murray Hartman, oilseed specialist with Alberta Agriculture, says an established clubroot patch could have 1,000,000 times the clubroot spore load than an area with trace clubroot infestation. Within this much higher population of spores, there is a greater chance of selecting for a population that can overcome the clubroot-resistance gene. Hartman adds that patches of established clubroot would also have more genetic diversity due to an age effect (more diversity is known in older established infestations versus recently introduced, younger populations). Thus there is dramatically higher selection pressure on variety resistance once clubroot patches have established in a field.

Hartman draws a parallel between this risk and the risk of weed resistance to herbicides. Hugh Beckie, weed research scientist with AAFC in Saskatoon, predicted in 2010 that kochia would be among the first glyphosate tolerant weeds in western Canada. He was proven right. (Beckie’s study is published here.) One of the key factors in his model was the importance of weed abundance (population size). A large percentage of kochia weeds emerge in the pre-seed window and Beckie’s model predicted that widespread application of pre-seed glyphosate on this large population would increase the chance of selecting for glyphosate-resistant kochia. In many cases of weed resistance, key management advice now is to prevent any escapes from setting seed (such as hand pulling once again practiced in cotton), and this also works by attacking the population size factor. Using clubroot resistance varieties before clubroot becomes a yield-limited threat will keep clubroot spore populations low.

Once clubroot has been introduced to a field, spore build up will only occur with host crops (canola) or host weeds. Choosing canola varieties with genetic resistance and using crop rotation are the only management steps to limit spore build up and economic losses in canola. Clubroot does not cause economic damage in any other common Prairie crops.

Do you need a clubroot-resistant variety?
Clubroot resistance is an important part of clubroot management, and growers are advised to start using clubroot-resistant varieties as soon as clubroot is identified in their area. This will help keep clubroot at low levels in fields, and reduce the risk of selecting for resistant clubroot races. Using resistant varieties only after clubroot is well…
List of clubroot-resistant canola varieties
*Updated January 10, 2019. Email whetterj@canolacouncil.org if you have varieties to add. Here are the clubroot-resistant (CR) canola varieties currently available in Western Canada. Varieties with a ** denotation contain a new clubroot resistance trait. Brett Young 6076 CR** 6090 RR 4187 RR (previously SY 4187) Canterra CS2000 CS2600 CR-T DeKalb (Bayer) 75-42 CR DKTF…
Glyphosate resistant kochia found on Prairies. Now what?
Agriculture and Agri-Food Canada confirms that glyphosate resistant kochia has been found in Southern Alberta. The resistant weed species was found in three fields of chemfallow. This confirms that glyphosate-resistant weeds can develop on the Prairies. To reduce the risk of selecting for resistant weeds on your farm: —Control weeds early. Herbicides are more effective…
Clubroot management: Book resistant seed early
Growing a clubroot-resistant variety is an important step in clubroot management for farms with clubroot, for farms in a county, district or municipality with clubroot and for farms adjacent to an area with clubroot. The number of farms that fall into one of these three categories increases every year and took a big leap in…