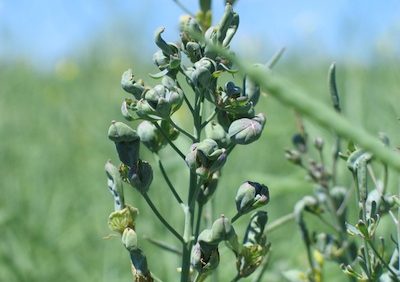 Yes, 2012 was a bad year for aster yellows in canola, but we have to keep this disease in perspective. Sclerotinia and blackleg are potential threats each year, and remain the top two most important canola diseases. Aster yellows has had only 4 bad years on the Prairies to date: 1957, 2000, 2007 and 2012. That said, three of those years are fairly recent, and after the heavy infection rates in 2012, aster yellows is hot topic among growers and agronomists.

The Canola Council of Canada agronomy team came up with the following 10 questions about aster yellows. Chrystel Olivier, research scientist with Agriculture and Agri-Food Canada in Saskatoon, answered them the best she could given what is currently known about the disease.

1. Are there differences between varieties when it comes to aster yellows (AY) severity? If yes, do we know if this represents some genetic resistance?

So far, no canola varieties are known to be resistant to AY, but based on field observations during the past 15-20 years, B. rapa seemed to be more susceptible to AY compared to B. napus, B. juncea or S. alba. However, no laboratory work was done to investigate the cause of the difference in susceptibility.

This summer of 2012, differences in the percentage of plants expressing symptoms were observed between cultivars for B. napus and S. alba, in the AAFC experimental nursery (small plots). No laboratory work was conducted to explain the difference between the percentages of symptomatic plants.

Note: Trials in small field plots at the AAFC farm showed differences in the percentage of AY-infected plants between lines of Camelina sativa. Insect sampling revealed that there were fewer leafhoppers in the lines showing few (or no) AY symptoms, as compared to the other lines. These results seem to suggest that feeding preference from the leafhopper might influence the percentage of AY infection among the plants. These results, although promising, need to be taken carefully as feeding preferences might not have a major impact on AY infection in large field acreage.

2. Can infected seed carry aster yellows on to the next generation?

It has always been admitted that phytoplasmas could not spread via seeds. However, phytoplasma DNA was found in seeds and/or embryos of several plant species in Canada (B. rapa, B. napus), Europe (B. rapa, tomato and corn), Oman (alfalfa), Africa (Coconut palm), Peru (corn) and Asia (mulberry). In most cases, phytoplasma DNA was found in the embryos and the early seedling stage. The exception is alfalfa where one seedling out of the 84 tested grew with phytoplasma symptoms. Recently, several articles in Europe started to mention that “a low percentage of seed transmission should be considered for phytoplasma”.

3. Can perennial weeds provide an overwintering bridge for aster yellows? If yes, which weed species are more likely to have the disease? And what is the likelihood that the disease will transfer from weed to crop next year?

In the Canadian prairies, AY phytoplasma can be transmitted by several leafhopper species (the main vector Macrosteles quadrilineatus and at least 7 other species). AY can also infect more than 200 plant species, including some very common weeds such as dandelion and shepherd’s purse, most pasture grasses and common shrubs and trees such as raspberry, willow and chokecherry. Phytoplasma will overwinter in roots of perennial plants as well as in aerial parts of fruit trees. Phytoplasma will also overwinter in the body of their leafhopper vector, when the overwintering stage of the leafhopper is the adult or larvae stage. Therefore, perennial weeds and plants growing in the prairies are potentially a strong disease reservoir for phytoplasma and the likelihood of AY being transmitted from the reservoir to the crop is high. However, no study has been conducted to know the extent of the infection among the perennials weeds and plants. Studies in carrot crops in the U.S. showed that weed management is important to reduce leafhopper population.

Note: Based on PCR tests done on leafhoppers sampled in Saskatchewan, a steady decrease of AY infection was observed from 2000 (outbreak year) until 2003 (8% in 2001, 5% in 2002 and 3% in 2003). Knowing that in 2001-2003, the amount of migratory leafhopper that were infected was very low, the percentage of infected leafhopper observed in 2001-2003 could be explained by the presence of a high number of AY-infected weeds and grasses following the outbreak year.

4. Some growers claim that insecticide applied for other insects also seems to have reduced aster yellows. Is this possible? If yes, what can growers do to achieve this benefit the next time we have a leafhopper/aster yellows outbreak?

It is possible that some growers might have caught the bulk of the AY-infected leafhopper a few hours or day after the migratory leafhoppers arrived in their crops, and therefore managed to reduce the amount of AY transmission. However, I have heard both sides of the story: some growers sprayed at the same time as the neighbours with no positive results, while the neighbour seems to have a less infected crop.

In order to have successful spraying, insecticides should be applied very quickly after the migratory leafhoppers arrive, as leafhopper can transmit AY in less than 8 hours (3 hours for 3 leafhoppers per plant is the usual threshold in the lab). If you look at the south wind dates provided under question 9, you’ll see that leafhoppers could arrive very early in season. Systemic insecticides are known to be effective in preventing disease transmission, however, no study has been done on field canola.

5. Why were leaf hopper phytoplasma carrier rates so high this year? What is happening down south in their overwintering areas to cause this? How does insect ecology correspond to disease epidemiology?

It is difficult to answer. Based on observations/surveys made during the last outbreaks, several hypotheses have been advanced, but never really proven. Mild winters caused by climate change are increasing the survival of overwintered leafhoppers, plants and phytoplasma. This year, in the Prairies, all leafhopper species were very abundant. The number of the main AY vector M. quadrilineatus was overwhelming, with thousands found in crops. Other potential AY vectors were also very abundant. As an example, Athysanus argentarius, an AY vector feeding in the pasture surroundings canola crops, was found on average at a rate of 3-4 per sweep during the past 10 years. This year, the average was above 200.

Note: Drought also seems to increase the percentage of phytoplasma infection in hosts.

6. The disease survey counts only plants with bladder pods as having aster yellows. Is it true that for every one plant that tests positive for bladder pods, 2.5 are positive by PCR. If incidence is 10% by visual survey, it will be 25% by PCR. Is this ratio specific to this year or historical?

This is true as AY-infected plants do not always show symptoms. Below is a graph representing the difference between the percentage of AY-infected plants estimated with visual observations and by using PCR tests on 100 plants per field.

In the graph above, the percentage of infection for 2012 was estimated mid-July. The numbers for August are not in. Once known, it will be possible to say if this 2.5 ratio was also valid in 2012.

7. Is this statement correct? 30-60% of seeds are usually lost in aster yellows infected plants, but this year seed loss was significantly higher.

8. Are the offspring of leafhopper carriers also carriers? Can phytoplasma transfer generation to generation in the insect?

9. What do you think are the key reasons for the higher outbreak in 2012?

Several reasons might explain the 2012 outbreak.
—Milder winters during the previous years that allow local leafhopper population to survive winter and to build up, hence the high abundance of local leafhopper species observed this year and better overwintering of AY-infected plants.
—The drought and mild winter that occurred in the U.S. this year might have increased the abundance of the leafhopper and their level of infection.
—South winds seem to have arrived in the Prairies earlier in 2012. Below are the arrival dates of the first South wind each year, based on meteorological data. In conclusion, this 2012 outbreak might be due to high inoculum coming early this year.

10. What are the key management techniques growers can follow to reduce severity of the next outbreak?

This is difficult to answer, as we don’t know all the parameters and players involved in the AY epidemiology. An easy way to reduce the incidence would be to reduce the level of weeds in the fields, as it gives leafhoppers food choice.

So far, there is no economic threshold for canola, and no resistant cultivars. If spraying is the grower’s choice, it will need to be very timely (i.e., just after the leafhopper arrival), otherwise, it is not effective.