Home / Canola Watch / What does a 5” rain do to soil nutrient availability? 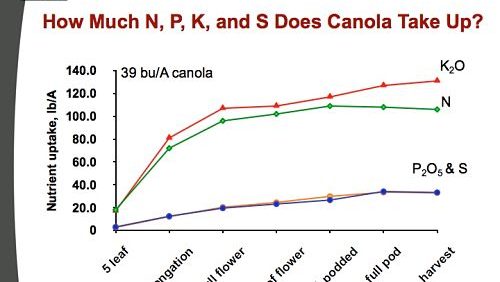 After a heavy rain, canola in higher ground might be in good shape. Canola on the edge of standing water may be experiencing some stress due to reduced root function, and the nutrient deficiency that results. Lowland canola submerged in standing water for a few days will probably die. While assessing the recovery situation, some farmers and agronomists may be curious about soil nutrient levels.

When a field experiences heavy rainfall in a short period of time, this volume of water may be more likely to remove nutrients through erosion than through leaching. Even then, losses may be minimal if erosion is kept low due to rooted crops and ground-covering residue.

John Heard, crop nutrition specialist with Manitoba Agriculture, reminds us that only the mobile forms of nitrogen will move – primarily nitrate, but urea is also water soluble. Ammonium will not move much. Nitrogen stabilized with DCD (in SuperU) or nitrapyrin (in eNtrench or N-Serve) will not move much either, he says.

Heard says leaching would be a higher risk with five 1” rains over a week rather than one 5” rain. He also says soil texture is a major factor in leaching risk. Sandier soils don’t hold as much water and allow for faster infiltration through the soil horizon. Clay soils hold more water, but also infiltrate more slowly – so runoff may be higher. Even so, he notes, when leaching does occur, these nutrients will be spread throughout the soil profile and most of it will not be lost. He cites the following paragraphs from Charles Shapiro from Nebraska:

“For example, assume you have a silt loam soil that holds 2″ of plant available water per foot. The top four feet can hold 8″ of infiltrated water before it moves deeper. If nitrogen was applied as a surface broadcast application immediately before rainfall, it would move down with the rainfall. Its distribution in the soil would not be uniform, but 3″ of infiltrated rain would distribute the nitrogen in the top 18″ of soil. There would still be some nitrogen in the top 6″, but the “bulge” of the nitrate concentration would be at about 12″. Corn roots will grow into that nitrogen and there should not be an N deficiency as early plant needs would be met.

“If there were 6″ of infiltrated rain, the nitrogen would be distributed over three feet. There would be very little N in the top foot, with the N bulge now about 18″ deep. There would be limited N for a young corn plant and a delay until the corn roots reached the nitrogen available between 18″ and three feet. If the same scenario happened on a sandy loam with 1″-per-foot water holding capacity, all these depths would be doubled, and there might be problems with the 3” rain.”

John Lee, soil scientist with Agvise Labs in North Dakota, provides a similar example from June 2020. “In the past two weeks a few areas here in eastern ND have had excessive rainfall (4” to 7” in one shot). A local agronomist wanted to know how far the spring applied N had moved.  He tested down to four feet and found most if not all of the N applied this spring.  Granted these were fine textured soils, but most of the N was still in the 6-24” and 24-48” zone. With the fine texture, I think a lot of the rain just ran off and did not move the N very far in the profile.”

What to do about it? With big rains and flooded fields, the issue of lost nutrients may not require any action because (1) it will be hard to access these very wet fields with an applicator, and (2) even if some nutrients were leached beyond the reach of roots, those flooded areas may not have the yield potential to justify a top dress. Finally, (3) there’s the question of timing. Canola plants have taken up about 70% of their nitrogen by stem elongation and basically all of it by full flower. Ideally, nitrogen top dresses are applied before the six-leaf stage. Only in situations of fairly severe deficiency will top dress applications after the six-leaf stage make much financial sense for the current crop. Also note that with good soil moisture and warm temperatures, mineralization of soil organic matter will be releasing nitrogen for crop uptake.

Sulphur losses. Sulphur can also leach, and crops take up sulphur slowly through all growth stages. If the crop shows signs of sulphur deficiency, a top dress of sulphur may make sense. Find more on top dressing and deficiency symptoms in this article.

Excess moisture: Nutrient deficiencies
Canola in fields with excess moisture will often show various signs of stress, including yellowing, purpling, stunted growth — or all of three. Excess moisture creates two problems for crop nutrition: (1) It can remove nutrient from the soil. And (2) it can “drown” roots and make it impossible for them to take up nutrients…
Excess moisture and nutrient loss
Heavy rains can increase nitrogen and sulphur leaching in lighter soils, and increase denitrification in heavier soils. While very good soil moisture conditions may increase canola yield potential, those rains may have depleted the nitrogen reserves somewhat. Top dressing is an option. Whether top dressing makes financial sense may depend on the conditions of the…
Scout for nutrient deficiency
Nitrogen: If timely moisture has improved yield potential and if applied nutrient was not enough to meet this new yield potential, canola fields may benefit from a top dress of nitrogen. Nitrogen deficiency symptoms first show up in older leaves as pale green to yellow colouring, and sometimes purpling. Tissue analysis can confirm these observations,…
Diagnosing nutrient deficiency
Visual assessment of nutrient deficiency symptoms is not good enough for an accurate diagnosis because symptoms can have many causes. Purpling is one example. Purpling is often considered a tell-tale sign of phosphorus deficiency, but purpling is actually a response to any stress. The plant is not producing chlorophyll in those areas, so the underlying…