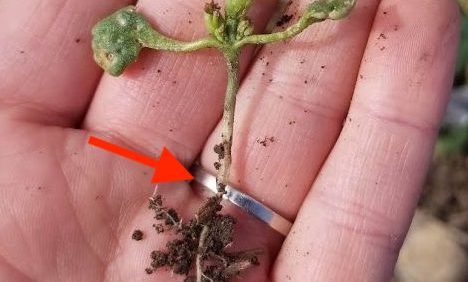 Got canola emergence issues? Little canola plants are vulnerable to many different risk factors, including seedling diseases. Seed treatments are usually very good at managing the common seedling disease pathogens of canola, however seed, seedling and root rots can flare up under the right circumstances. Here are details about the three pathogens in the canola seedling disease complex, and the factors that tend to favour each of them.

Rhizoctonia solani. This pathogen causes one of the more familiar of the canola seedling disease symptoms, the collapsed and brown root tissue called “wirestem”. The Canadian Prairies has two common “groups” of this species. One group, which pathologists call AG2-1, likes it cold to cool, while the other group, AG4, likes it cool to warm. AG2-1 is more of a crucifer specialist and is the more common group in the Peace region. It can be active at soil temperatures as low as 2°C, and it tends to be more severe when soils are moist and warmer than 2°C. Like root diseases in general, damage tends to be worse in heavy soils and compacted soils.

Fusarium species. Many different Fusarium species are active on canola seedlings. “There is a high degree of variability among the species and within a species, but I would say that more of them have preferences for warmer temperatures and moist soils, says Krista Anderson, agronomic solutions manager with Bayer Crop Science in Saskatoon. “Severity also tends to increase with wet/dry cycles – probably because it is a stressor for the plant and makes it more vulnerable.”

Pythium species. Pythium likes saturated soil and is most active at soil temperatures of 5°C to 15°C. Once soil moisture drops below 75 per cent water holding capacity, infection potential really drops, Anderson says. Pythium tends to be the first to infect, getting at the seed within three to five days of germination. P. ultimum is the most common Pythium in canola and will infect almost any crop. “Therefore, a very diverse rotation will help manage the soil-borne diseases,” Anderson says, “it just won’t eliminate them.”

In describing how the three different families of the canola seedling disease complex enter and infect canola, Anderson says, “Pythiums need someone to open a door. Fusariums bust though doors and windows. Rhizoctonia takes a sledge hammer to the wall.”

When scouting for the cause of poor emergence, check for the following symptoms of seed decay, stem rots and root rots that are all part of the seedling disease complex:

What else could it be?

While scouting for stunted, missing or damaged plants, also consider these other common causes:

Insect damage. Patterns confined to hill tops, side hills, water runs or field edges often suggests environmental, disease or insect problems. Cutworm feeding, for example, results in notched, wilted, dead or cut-off plants. Flea beetles will congregate and feed in patches across the field as they arrive, so check for foliar leaf damage and stem feeding.

Weather-related stress. Excess moisture, drought, frost and wind can all kill or damage seedlings. Watch for patterns as frost and excess water will both tend to collect in low spots. Consider recent weather conditions when diagnosing establishment issues.

Herbicide carryover. Hilltops are more susceptible since they can be lower in organic matter, reducing the buffering capacity of those areas, and they remain drier, resulting in less opportunity for breakdown to occur. Note that with herbicide carryover, plants need to be growing to take up herbicide, so it will usually be a case of damaged plants rather than missing plants.

Start checking for emergence issues about seven days after seeding, and keep looking over the following couple of weeks. Three weeks after seeding, take plant counts to see if the stand is in line with your target.

Seedling diseases in deep-seeded canola
Canola seeded too deep is at higher risk of seedling diseases. Deep seeding requires a long hypocotyl for the plant to reach the soil surface, which exposes more of the plant to soil-borne disease pathogens. Deep seeding also extend the days to emergence, which means the plant is at its vulnerable stage for longer. Other…
Damage ID: Cutworms or seedling diseases?
Plants clipped off or that emerged then died off could be under attack from insects or seedling diseases. Or something else entirely. The Canola Diagnostic Tool at www.canoladiagnostictool.ca can help growers and agronomists work through a process of elimination to find the right cause(s). When working on underground symptoms, a good investigation kit requires a…
Moist soil increases seedling disease risk
The seedling diseases risk increases with moist soil conditions and with tight canola rotations. The three best management steps for canola in this situation are: 1. Use treated seed. Certified seed all comes treated, but if you’re tempted to use non-treated seed as a bulking agent, don’t bother. Seeds and seedlings from this seed will…
Podcast & Video – Seedling disease complex
Pythium species, Fusarium species and Rhizoctonia solani – the “three amigos” – can cause seed rots, root rots and stem decay on young canola plants. Seed treatments are generally pretty good, but in the podcast below Krista Anderson from Bayer, Mark Belmonte from University of Manitoba and Autumn Barnes from the CCC explain the factors…