Home / Canola Watch / Green seed: What to do about it? 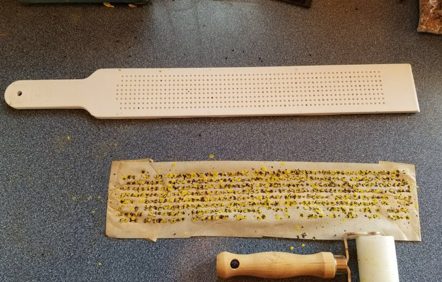 Most green seed issues result when heavy frost hits canola before the seeds mature. This permanently stops the chlorophyll-clearing process and locks in green. Nothing can be done to reduce this green. Drying can shrivel up green immature seeds, which might seem to have a benefit, but it does not reduce the green in mature seed. 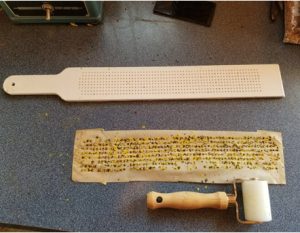 With high-green canola, farmers will want to:

Research the best market options. Elevators and processors may take it, but best prices might come from alternative markets. This could include animal feed or other end uses. Companies that buy high green canola.

Take care with storage. Canola with high green can be more volatile in the bin, and is at higher risk for heating. Articles on green and storage.

Plan for next year. Consider the factors that led to higher green this year and assess whether it makes sense to take steps to reduce the risk for next year. Was the cold September an anomaly? Maybe, but killing September frosts are not that rare. Higher seeding rates and earlier-maturing varieties can shorten the days to maturity and reduce the green risk.

The problem with green

Green canola seed usually has issues other than just high chlorophyll levels. Canola delivered with high levels of green seed was probably swathed immature or was frozen before it had a chance to fully cure. Therefore canola with high green seed content also tends to have smaller seeds, more damaged seeds and a lower overall oil content per tonne of seed delivered.

High amounts of green chlorophyll in the seed also increase the processing cost because that chlorophyll must be removed to produce the light-coloured oil customers expect.

Processors use a clay filtration process to remove chlorophyll. Natural clay particles — “Fuller’s earth” or “montmorillonite clay” used specifically for their high adsorption qualities — are added to the oil. Interestingly, these same clays are used to clarify wine. Chlorophyll molecules bond with the clay particles. The clay is then filtered, taking the chlorophyll with it. Canola oil with higher chlorophyll content will require more clay and possibly more passes with the clay to remove that chlorophyll, adding to the cost required to clarify the oil. “All canola oil gets the clay treatment, but the more chlorophyll, the more clay and cost required for that step,” says Dave Thiessen, edible oils facility manager with Bunge in Altona, Manitoba.

Adel Ghabour, quality assurance manager with Richardson Oilseed in Lethbridge, Alberta, adds that the more clay used to remove colour, the more oil that is lost in the process. “Oil is trapped within gaps in the clay, and that oil is not recovered unless the clay goes back through the extractor,” he says.

Green seed – Common questions
What causes high green? Most green seed issues result when heavy frost hits canola before the seeds mature. This permanently stops the chlorophyll-clearing process and locks in green. Nothing can be done to reduce this green. In other cases, cutting canola too green or in hot weather that leads to fast dry down can trap…
Late-harvested canola may have more green
Late harvested canola fields that were at various stages of growth when swathed may have high levels of green seed. If that is your situation, here are two articles that may be helpful: 1. What to do with high green canola provides sampling and storage tips. Note that high green can increase the storage risk.…
High green increases storage risk
Canola with high chlorophyll content is less stable in storage, even if the canola is dry and cool. The safest bet is to deliver sooner than later. If that is not an option, proper conditioning and frequent monitoring for heating and spoilage are crucial until it can be delivered. Companies that buy high-green canola Other…
Seed still green but mature
This time of year, mature canola seeds can take a long time to turn brown or black. Growers wondering why seed colour change is taking so long may want to check the fields again and look for these other signs of maturity: All seeds are firm to roll. (Watch the short video above.) If the…