Getting crop in the bin is a bigger issue than residue management right now. Residue will be a factor in harvest because standing canola downed by snow will have to be combined close to the ground. That means more residue to churn through the combine and less residue to hold snow. Tough residue won’t chop and spread that well either. But that’s just the way it is. Deal with residue later. 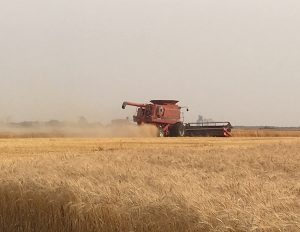 Don’t swath. Swathing will not likely speed up harvest for tough, flattened crop. Handling fully mature crop twice could significantly increase the potential for shattering or pod-drop losses, and this bushy mature crop will have to be cut very low, leaving it at significant risk for blowing.

Cold temperatures help for residue management. Hard frosts and a cycle of drying-wetting-drying helps to decompose material. Residue should break up well when warm temperatures return.

Harrow in the spring. Harrowing works better in hot, dry conditions. Once residue dries up in the spring, harrow it then.

Residue rescue: Survey results
High cereal yields last year mean more residue issues this spring. If the drill cannot cut through or dig under the residue to place seed into soil, then some sort of residue management may be the lesser of two evils. We ran a survey the past two weeks asking Canola Watch readers for their thoughts…
Residue management starts at the combine
An important factor in canola stand establishment next spring is the crop residue situation this fall. An even mat of cereal residue is preferable to clumpy distribution that can affect drill performance, seed survival and overall crop uniformity next year. Fall is the best time to make sure residue is spread evenly. A properly adjusted…
Residue Management for 2010’s Canola
The cold emergence period this spring was certainly challenging but in some fields was aggravated by poor residue management in the previous crop. As harvest gets underway, consider residue management in fields destined for canola in 2010. Good chaff spreading and straw dispersal can help ensure good soil to seed contact next spring. Stand establishment…
Will your residue management plan set you up for a strong spring?
Straw conditions can be the limiting factor when it comes to proper chopping and spreading.  Rushing a cereal harvest with very tough straw can lead to a residue situation that is extremely difficult to remedy.   It may seem like a long ways away, but that field that you’ll be combining will be getting seeded…