Home / Canola Watch / Map of the Week – Clubroot in Manitoba 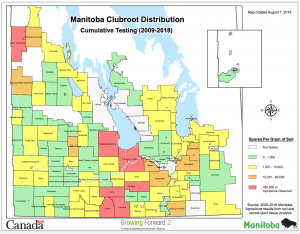 1. We are seeing increasingly tighter canola rotations. Canola acres in Manitoba are setting a record (two years in a row now) with 3,258,916 acres seeded this year, according to MASC data. More canola allows the disease to propagate and cause increasingly higher levels of infection.
2. Drier conditions have allowed crop to establish in previously unproductive low areas/potholes etc. What may have previously been attributed to drowned out or water-stressed spots in wetter years (2016 and prior) in canola is now raising suspicious with dry conditions. Sickly above-ground symptoms are causing producers to inspect and pull plants, and they’re finding clubroot. Clubroot may have been the cause in other years but was written off due to other prevailing environmental conditions.
3. Farmers know the disease is spreading and have invested more time to scout crops or have professional agronomists monitoring their fields.
4. Very dry topsoil conditions in spring for the past two years coupled with windy weather caused soil movement. This may not be enough to cause visual symptoms initially, but may spread the disease in very low levels with the potential to cause future infection if proper rotations/resistant cultivars are not used in high-risk areas.

Clubroot update: Manitoba cases, R varieties
Manitoba has a few confirmed cases of clubroot in 2015. One field with galls was found in the R.M. of Pembina, and fields with galls were found in the Swan River Valley. Manitoba’s Pest Surveillance Initiative Lab also confirmed the presence of clubroot DNA in soils in many areas of the province, and testing is…
Clubroot management for Manitoba
Two Manitoba fields surveyed in the canola disease survey in 2012 have been confirmed to have clubroot. DNA for Plasmodiophora brassicae, the organism that causes clubroot, was detected in soils from these two fields, and a brassica plant grown in these soils in the lab exhibited clubroot symptoms. Manitoba Agriculture made this announcement March 1.…
New clubroot pathotype in Manitoba is an important reminder to implement management plans, including fall scouting
Latest News
September 10, 2019 – Manitoba Agriculture’s discovery of a clubroot pathotype in South Central Manitoba that is able to overcome the original source of clubroot resistance should encourage all canola growers to implement clubroot management strategies, including scouting fields now for symptoms of the disease. Outside of Alberta, very few fields have been found to…
Clubroot found in Manitoba canola
Manitoba has had two canola fields confirmed this month to have clubroot symptoms on plants. Last year, clubroot was confirmed in two soil samples in the province, but plant symptoms were not observed. Clubroot is expected to spread across the Prairies eventually. The disease was first detected in Manitoba in vegetable crops in 1925. It…