We haven’t lost a crop in March, but growers across large parts of Western Canada are concerned about the soil moisture situation. This may influence decisions on seed costs, fertilizer rates and, when the time comes, seeding depth. 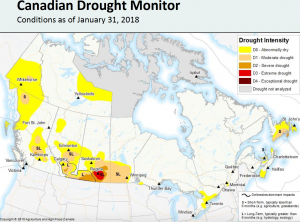 Link to this map with AAFC commentary. 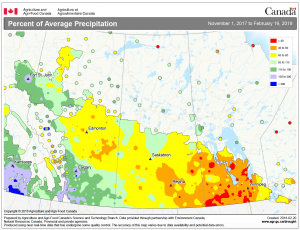 Saskatchewan’s Clark Brenzil uses rainfall between June 1 to September 1 or June 15 to September 15 as a gauge. See the maps below. “These maps are only a guideline and divisions are not universal for each herbicide. Each herbicide requires a different amount of moisture for proper breakdown. Producers should check with manufacturers of residual/soil active herbicides to determine their level of concern for their rainfall amount,” Brenzil says. 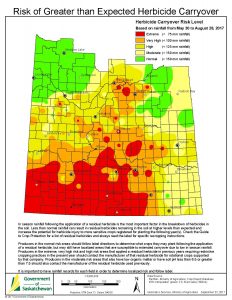 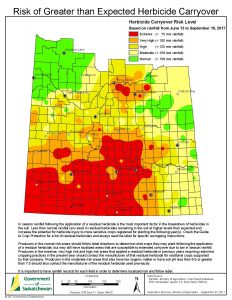 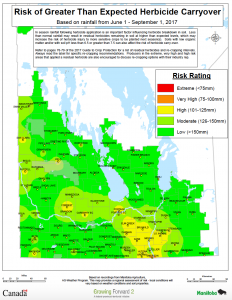 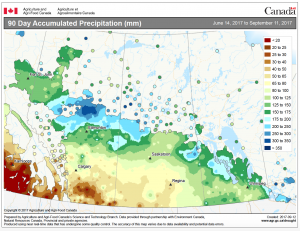 Elevated risk for herbicide carryover
A dry summer and fall in certain areas of the Prairies created a high risk situation for herbicide carryover this spring. High spring moisture from increased snow fall will not help much because microbial activity does not occur, no matter the soil moisture level, until soil temperatures are 5°C and then only increase marginally until…
Dry conditions elevate herbicide carryover risk
Residual herbicides need moist soils and warm temperatures for breakdown to occur within the expected time frame. In dry conditions, the two major breakdown methods – hydrolysis and microbial degradation – will slow down, which elevates the risk that these herbicides will remain active in the soil for longer. Soil residual herbicide levels can actually…
Consider herbicide carryover before seeding
Many growers decided to increase their canola acres this year. Other growers may decide to keep the same acres, but will be juggling fields at the last minute. In either case, canola is often going on fields not planned for canola when growers did their herbicide applications last year. This could raise some issues with…
Map of the Week – Herbicide carryover risk
The map below shows herbicide carryover risk in Saskatchewan based on summer 2017 precipitation. In-season moisture from last season is the measure that influences herbicide breakdown. Fall rains come too late as the amount of breakdown has already been set. Spring moisture from snow-melt may liberate herbicides from the solid portion of soils, but at…