Home / Canola Watch / Where did 2017 yield come from? Where did the yield go?

Based on the latest (but not final) StatCan estimates, canola yields in Manitoba in 2017 were better than the 5-year average, yields in Alberta were around average, and yields in Saskatchewan were below average. These, of course, are broad generalities. Some regions had yields range from single digits to well above 60 bu./ac.

What were the key driving factors behind very good yields in some areas and poor yields in others? 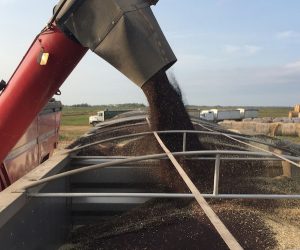 Good subsoil moisture. Soil moisture reserves carried a lot of crops toward good yields even while in-season rainfall in most regions was well below average.

Moderate temperatures. Cooler nights in July were a big positive factor in Manitoba in particular, where hot days and warm nights through flowering are the norm. Canola prefers the cooler conditions Manitoba experienced in 2017. (See the maps at the bottom. Click them to enlarge.)

Less disease. Lower than average rainfall reduced sclerotinia stem rot severity in many regions. This improved yields and reduced costs of production for areas that often have higher disease incidence rates. Note however that there was substantial variation in disease levels across the Prairies. And while disease survey results, in general, report decreased disease within each province, an exception was blackleg in Saskatchewan where the incidence of basal cankers was higher in 2017 compared to 2016.

Lack of moisture. Drought or near drought in some regions led to the single digits yields noted at the top of the article. (See the maps at the bottom. Click them to enlarge.) In some areas (eastern Manitoba, for example), less moisture than has been usual the past few years may have actually helped yields.

Excess moisture. In some areas, excess spring moisture delayed seeding. (Delayed 2016 harvest was wrapped up in this.) Even so, excess moisture and delayed seeding could have been an overall positive for yield with a long fall, but the fall wasn’t long enough for some. Small areas north and east of Edmonton still don’t have the crop off. (See the maps at the bottom. Click them to enlarge.)

What were key yield factors in your area in 2017? Please take a minute to share your experiences through our quick Canola Watch survey:

Create your own user feedback survey

Click here if the embedded file doesn’t show up on your device. 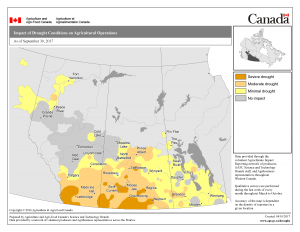 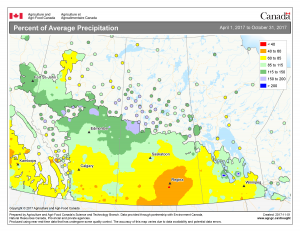 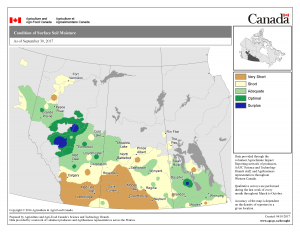 Seed decision survey – 3 quick questions
If the embeded survey below doesn’t work on your device, click here. Create your own user feedback survey
Swathing when hot increases yield loss
With day time highs in the 30s or high 20s, growers should wait for cooler days before swathing the crop, if possible. Cutting canola in hot conditions will lead to rapid dry down and desiccation, which increases seed shrinkage — and leads to yield loss. Swathing on hot days is especially risky for canola crops…
Spring-harvested canola: Feedback
We’d like to know how spring-harvested canola worked out for you. Please take a moment to share your experiences and provide Canola Watch some feedback. Thank you. Create your own user feedback survey If the embedded survey doesn’t work, click here.
Increase fertilizer rates to match yield potential
In a recent survey on agronomic practices, the Canola Council of Canada found that, on average, growers were applying 79.5 lb./ac. of actual nitrogen, 25.8 lb./ac. of phosphate (P2O5), 4.9 lb./ac. of potassium (K20) and 13.6 lb./ac. of sulphur to their canola fields. This may not be enough for high yielding canola. Canola that yields…