Home / Canola Watch / Will your residue management plan set you up for a strong spring? 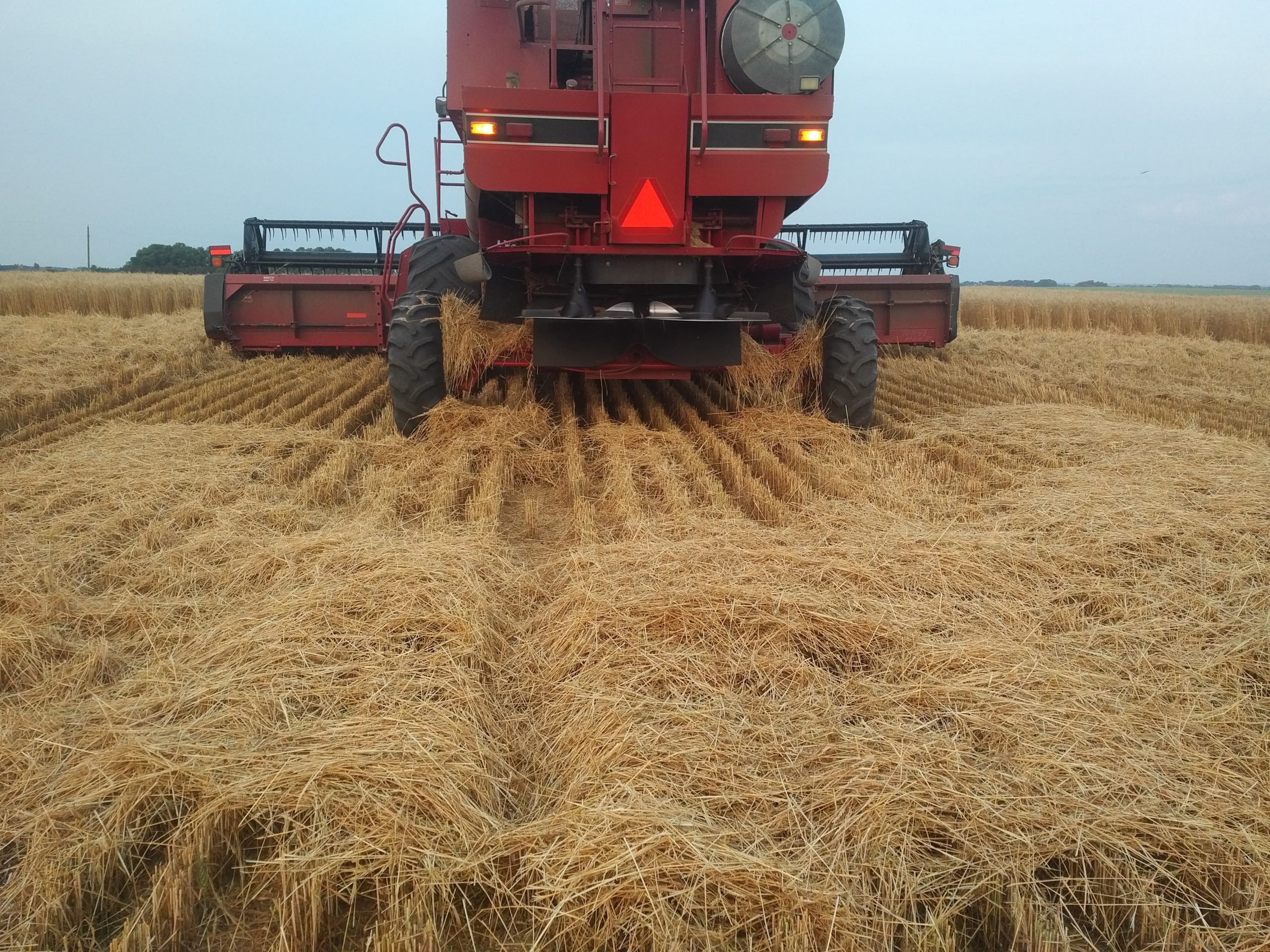 Straw conditions can be the limiting factor when it comes to proper chopping and spreading.  Rushing a cereal harvest with very tough straw can lead to a residue situation that is extremely difficult to remedy.

It may seem like a long ways away, but that field that you’ll be combining will be getting seeded again in several months. Give your future seedbed a good start by managing your residue this fall.

Combine adjustments. Let the combine do the work to provide a thin even layer of residue. This could eliminate the need to go in again to harrow or burn off residue. Before making any changes, get out and check spread patterns to see how performance can be improved. If displeased with the results, change one setting on the combine at a time to mark differences in performance. Here’s where to look to make changes:

Vanes. Changing the angle of vanes on the back of the chopper can be a simple and effective step, having one of the biggest impacts on the width and uniformity of residue spread.

Cut height. Cutting higher means less residue goes through the combine and needs to be spread over the soil surface. Ideally, find a cut height that is tall enough to improve residue spreader performance but not too tall as to affect residue flow through the drill in the spring. Taller stubble also traps more snow. Dropping straw for baling is one of the few situations where short stubble is appropriate.

Spread width. Larger header widths are becoming popular, which can present a challenge to the spreader’s ability to reach that same width for even distribution. Combine specialists say it can be done, it just takes time and patience with the altering of settings. Varying environmental conditions will play a role in spread performance, so settings may need to be adjusted again to suit the changing conditions.

Chopper knives. Make sure straw chopper knives are sharp. Sharpen them or replace them if necessary. This needs to occur regularly.

Fan speed or chopper speed. Higher speeds may be necessary in heavy stubble or with wide headers. However, when it comes to fan speed the first consideration should be to limit harvest seed loss. Crop yield takes a priority over residue distribution in this case. A better option may be chopper speed increases.

Chaff spreader. Adjust as needed to get chaff spread as wide and thin as possible. Spreading chaff equally is going to depend on the type of combine. Single rotor and conventional combines are fed differently and the distribution of chaff and straw is going to come out differently between the two types.

Harrowing. Heavy harrowing can be useful to spread straw in the fall or early spring if errors in the combine’s performance are evident. When using harrows, watch the level of aggressiveness as harrows cause soil erosion and disturbance, which will degrade the seedbed and dry it out. It can also rip out standing stubble, which is a beneficial crop residue component that helps prevent soil erosion. Standing stubble is also off the soil surface to allow for optimal performance of drill openers.

Spreading residue also means spreading weeds. While swathing or straight combining, look for suspicious weed patches that appear to escape control. Avoid harvesting through the patch and sample for herbicide resistance testing or identification if it is something not seen before. All of the operations above that are effective at managing residues are also very good at spreading resistance or the seed of new weeds throughout the rest of the field or beyond.

Residue management: The combine can influence stand establishment
Give your future seedbed a good start by managing residue this fall. Here’s how… Combine adjustments. Let the combine do the work to provide a thin even layer of residue. This could eliminate the need to go in again to harrow or burn off residue. Before making any changes, get out and check spread patterns…
Residue management starts in the fall
Thick clumps of residue mean uneven spring soil temperature and difficulty with accurate seed placement. Good residue management in the fall will help enhance drill performance, allowing for increased seed survival and an overall better field uniformity in the spring. Combine adjustments Let the combine do the work to provide a thin even layer of…
Residue management starts at the combine
An important factor in canola stand establishment next spring is the crop residue situation this fall. An even mat of cereal residue is preferable to clumpy distribution that can affect drill performance, seed survival and overall crop uniformity next year. Fall is the best time to make sure residue is spread evenly. A properly adjusted…
Cut height and residue spread can improve stand establishment
Cut height and residue spreading can influence stand establishment next spring. The article explains how and provides some harvest tips. Taller stubble height will trap more snow, increasing potential soil moisture next spring. Preserving moisture is more important in dry years, which is also when plant height tends to be shorter. This makes tall stubble…