There have been a few reports of farmers thinking there was minimal feeding going on in their fields and then receiving an unwelcome surprise when they checked it after a couple weeks and noticed significant insect damage. Farmers have also been seeking the identification of a cotton ball-looking material wrapped around some pods to know if it was helpful or hurtful, and others have been trying to recall economic thresholds for late season flea beetles.

To avoid any potentially bad surprises in your fields, reacquaint yourself with the insects listed below and then go have a look at your fields. You can always bring your handy, water and tear resistant CCC insect scouting guide along with you, as a cheat sheet!

Bertha armyworm (BAW) –  Bertha larvae often aren’t noticed until they move up the canopy during mid to late podding – at which point yield loss can occur quickly. They can be found lower in the canopy before that time, feeding on lower leaves. Assessing your crop early for telltale signs of leaf feeding will give farmers time to accurately assess the risk and apply a timely insecticide, if needed. READ MORE.

Cabbage seedpod weevil (CSPW) – You may not have noticed them when monitoring earlier in the season (in sweep net samples), but there are still reports of CSPW coming in from growers. READ MORE.

AAFC entomologist Hector Carcamo advises that if less than 25% of canola pods have exit holes and you didn’t spray, you were right not to. Alternatively, if you sprayed a high population of weevils, 25% exit holes could be considered a success.

Diamondback moth (DBM) larvae and adults – Although these insects may be done causing harm in some areas of the Prairies, farmers that have canola in the flowering or early pod-filling stage should keep a keen eye out for these little green worms and be aware of their economic threshold. The nominal threshold for DBM larvae is 200-300 per square metre (20-30 per square foot) in plants with flowers and pods. Plants under moisture stress and with very little leaf surface may be more likely to suffer yield loss, so the lower threshold number could be used in this situation. READ MORE.

Flea beetles– Although flea beetles late in the season can look alarming, as they tend to congregate in high numbers on just a few plants, it is very unlikely to be economical and warrant an insecticide application. An observational threshold of 100-300 flea beetles/plant has been suggested, but this would only be the case if this was found on the majority of plants in the field. In most cases the flea beetles that are spotted in fields are on the few green plants- canola or weeds- with delayed maturity (in a ripening field).

Red turnip beetle- Despite its appearance, it’s not a supersized ladybug, it is a different insect altogether. Fall is the time in its lifecycle when it comes out of diapause to lay eggs which will hatch next spring. Adults are active now. Watch for them in your fields as a potential indicator of issues next year.

Red turnip beetles eat plants from the brassica family only. They move into a canola field from fields sown to canola the previous year and, if necessary, can travel considerable distances to reach a canola crop. The pest is not a common economic threat. Red turnip beetles move slowly, completely devouring canola plants as they move toward the centre from the field’s edge, making the damage obvious from a distance. Targeted sprays are often enough, especially if damage is noticed early.

Root maggots– Maggots boring into taproots can be an entry point for disease, so you may see both. If the plant taproot breaks off slightly below the soil surface, then root maggots are likely suspects. Look for maggots, pupae or tunneling. READ MORE. 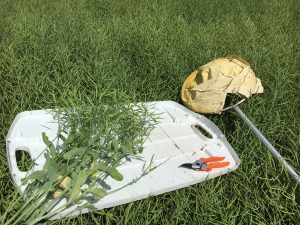 When it comes to insects, always remember to follow Scott Meer’s rule: Don’t spray for population control, spray to protect crops. Spraying a pest this year generally won’t have a huge effect on populations next year.

Scout the whole field for flea beetles
As seasonal temperatures warm up, flea beetles are more mobile — so the early season technique of scouting only at field edges no longer applies. When the weather is warm, it will be important to scout throughout fields for flea beetle hot spots. Spray only when damage reaches the action threshold — which is 25%…
Insect update
Insect threats are generally low across the Prairies right now, but it still helps to check. If spraying is necessary, make sure the chosen product has an appropriate pre-harvest interval. Bertha armyworm. As predicted by moth traps, the Peace region has fields at thresholds. Beyond the Peace, a few fields here and there have been…
Insect update
While you are out scouting for disease, you may as well check for a few critters too! Here are the insects you should be looking for at this time of year: 1) Flea beetles Description: These tiny beetles with oval bodies can emerge again in the fall and cause minor damage to fields, so they…
Insect update- DBM, BAW, flea beetles and root maggots
While some areas aren’t reporting much insect activity, there are a few insect hot spots and some regions with insects close to threshold levels. When scouting your canola for insects, go out in early morning or late evening when larvae are mostly active, and try to sample at least five locations (although 10-15 is recommended)…