The 2017 Canola Performance Trials are off to a great start this growing season! The 25 CPT small plot sites are distributed across Manitoba, Saskatchewan, Alberta and British Columbia. Small plot and field scale sites are located within the short-, mid- or long-season zones to provide canola growers with information on the how varieties respond to a range of environments.

Canola grower directors from MCGA, SaskCanola and Alberta Canola on the CPT Governance Committee strongly contributed to the array of 25 varieties – including ones with clubroot resistance – selected for this year’s trials. All three herbicide tolerance systems and nine different seed companies are represented. In addition to an updated conventional CPT protocol, select site locations will use a new CPT straight-cut protocol to conduct trials with varieties promoted for use with straight cutting. Check out the details of the two CPT protocols here.

With many of the sites emerged and having been sprayed with their respective herbicides, site audits have already begun. These audits provide one of the many quality assurance steps in the process to creating a high quality CPT dataset. Plot photos are also be taken with drones again this year for additional quality assurance, as they act as a reference when the CPT Technical Committee reviews the site results after harvest. In additional, new CPT signage (shown below) is going up at all the CPT small plot sites to showcase the 2017 trials (that are funded by MCGA, SaskCanola and Alberta Canola) at crop tours and field days. 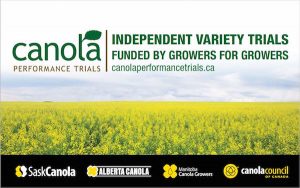