Grain bridge collapse. A “grain bridge” is a thin surface layer of crusted, spoiled grain which can hide hollow cavities below, giving the false appearance that the grain may be safe to stand on. Do not try to break the bridge by standing on its surface. The added weight of a person walking will cause the crusted surface to break, burying the person under several feet of grain.

Collapse of a vertical grain wall. Grain that has spoiled from improper storage can “cake” or stick together in large vertical columns on the side of bin walls. Any attempts to break this type of grain wall from inside the grain bin using objects (e.g. poles, shovels, boards, etc.) can cause masses of grain to avalanche and bury workers without warning.

“Suction” action of flowing grain. Persons who enter a grain bin with an unloading device running will have little time to react. The “suction” action is strong enough that a person cannot climb or walk against it and get out. Once surrounded in the grain flow, persons are quickly pulled down toward the bin floor. In 3 to 4 seconds, grain can reach above knee level, making it impossible to escape. Read the whole bulletin. 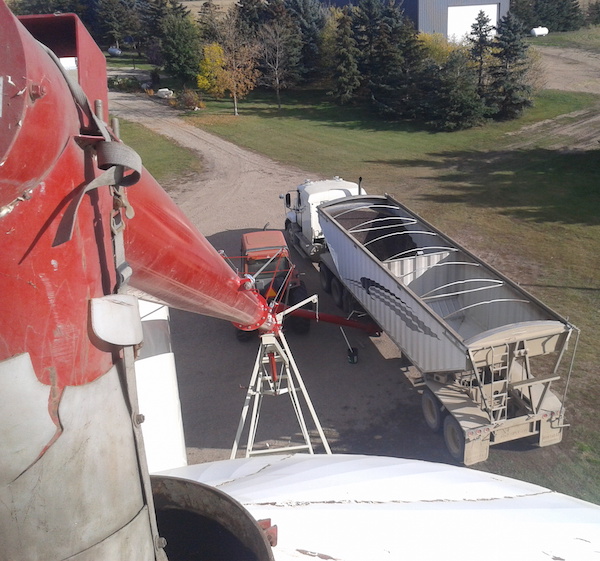 Four risks with augers.
1. Entanglement in the flight or drive. Unguarded intakes will shear anything, including body parts, if they are placed between the flight and tube end. Rotating shafts and pulleys will wrap any loose material including clothing that may come in contact with it.
2. Overhead power line contact.
3. Instability. When an auger is raised, its centre of gravity is raised, increasing the possibility of the intake end flipping up into the air and/or the auger tipping over.
4. Hoisting mechanism failure. Failure of the hoisting mechanism can cause the auger to collapse, possibly crushing anyone who may be underneath or near the auger.
Read the whole augers bulletin.

Be safe when handling grain
Please be careful when climbing grain bins to open hatches or probe them, when using grain handling equipment, and while transporting grain. And certainly try to avoid entering bins to help improve grain flow and break crusting. Manitoba’s Safe Farms program provides the following tips on how to control the hazards from its “Flowing Grain…
Keep It Clean: Keep treated seed out of hauled grain
As growers transition from seeding back to grain hauling to get bins cleaned out and ready for harvest, there are two timely “Keep It Clean” messages to keep in mind: 1. Carefully clean all treated seed and seed treatment dust out of the trucks and augers. Elevators are watching for this, and may reject loads…
Check with your grain buyer about quinclorac use in 2018
Growers are advised to contact their grain buyer BEFORE using quinclorac in 2018 as processors and grain handlers remain concerned about market risk. During the week of April 9-14th, the Codex Committee on Pesticide Residues decided to advance for adoption the proposed maximum residue limit (MRL) for quinclorac in canola. While this is a positive…
BeGrainSafe: Maintain a strict “bin entry” procedure
The Canadian Agricultural Safety Association (CASA) BeGrainSafe exhibit describes the risk scenarios for entrapment in grain, and the cumbersome removal steps required to get out someone who is trapped. Grain entrapment is a bigger risk now with larger storage facilities and faster augers. It can take seconds to be buried. The best move is to…