But with the unpredictability of crop production, situations often come along that buck the trend. This year may be one of those years when late seeded/reseeded canola crops work out better, in general, than the early-seeded crops. (We write “in general” because there are reseeded crops seeded into dry conditions that don’t look great, and some early seeded crops look excellent.)

Why are reseeded crops looking better?

Early moisture. Many early-seeded crops were stranded in a dry layer and didn’t get the after-seeding rain they needed. Reseeded canola often went into moist and warm soil, so got a much better start. Emergence rates were much higher and more even.

Later seeded crops may have been seeded a little deeper (up to 1”) into moisture, knowing that warm soils would help with pop up.

Frost avoidance. Early seeded canola fields were touched by a few frosts, some severe. Reseeded crops (often reseeded because of frost) avoided these.

Flea beetles. With faster emergence, the later crops outgrew the flea beetle threat faster and did not experience the loss of seed treatment protection that will happen with delayed emergence and slow early growth.

In parts of Manitoba in particular, some of the earlier crops were set back by crusting. This was not an issue later in the seeding season.

Mid-season rains. The rains of the past couple weeks will increase yield potential more for later crops than for early crops. For earliest crops already out of flowering, these latest rains will help with seed size but the yield potential is set. Later crops will continue flower and setting pods with the improved moisture situation.

The big BUT. Harvest is not here yet and late crops still face the second big risk with later seeding — the first big season-ended green-locking maturity-stopping fall frost. 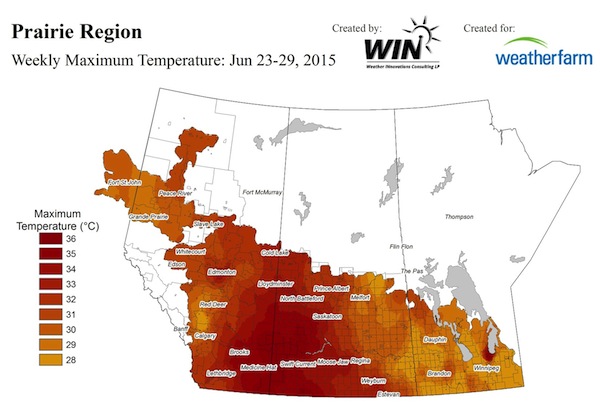 See the full size map on the Weatherfarm site. 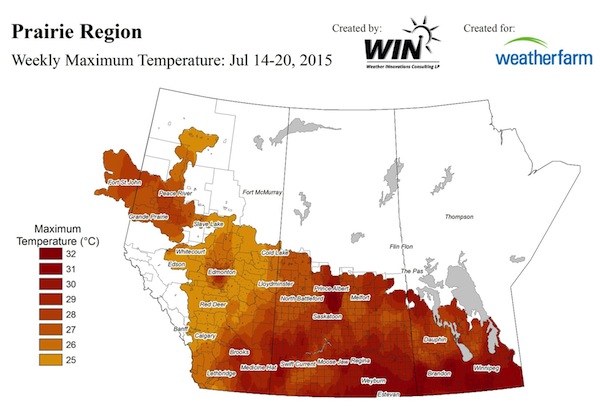 See the full size map on the Weatherfarm site.

Stand establishment: Little things that made a big difference this year
For many farms across the Canadian Prairies this year, dry soil conditions delayed germination, emergence and crop establishment. We note a few little details that seem to have helped canola emergence in these challenging conditions. Timely scouting. Those fields that needed and received timely flea beetle action, look better. These timely applications when often triggered…
Map of the Week
Here are two WeatherFarm maps. Click the map for a link to the original on the WeatherFarm site. The frost map (top) is for yesterday morning. Many areas that had frost yesterday had frost again this morning. The second map, also from WeatherFarm, shows corn heat units (CHUs) for 2014 as a percent of normal.…
Begin evaluating the year that was
Scouting at swath timing is a good time of year to begin assessing the growing season and begin planning for next year. In Manitoba, earliest harvested fields are not yielding to expectations. Take this opportunity to try and identify what might be at play leading to disappointing yields. Mother Nature’s environmental challenges played an important…
Top 10 reasons to manage for sclerotinia stem rot this year
10. Record snowfall and early spring moisture were enough to increase risk from the beginning of the season. 9. We don’t have truly resistant varieties. Even varieties with higher tolerance to sclerotinia stem rot can benefit from a fungicide application with average yield potential and good moisture before, during and after flowering. 8. Fungicide is…