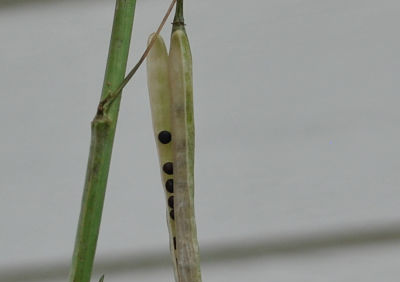 To determine which situation applies in a frost situation, do the following:
—Check standing canola the morning after a frost.
—Before taking any action, wait at least 4-6 hours after frost to allow the full extent of frost damage to become evident. The crop may look undamaged that morning but by the afternoon wilting, desiccation and pod splitting may begin. This crop may need to be swathed to preserve yield, but keep in mind that high green counts are likely.
—Light to moderate frost damage may take longer to show up. If no damage is evident after the first day and you decide to leave the crop, scout again after 2 to 3 days to reassess.
—If most or all seed is mature and you planned to swath the day after a frost anyway, then don’t bother waiting 4-6 hours. Just start swathing.

Heavy (“Sharp!”)frost… below -2°C: Assess the damage in early afternoon. Check pods for a white, wilted appearance. Pod shatter and pod drop could begin within a day, especially with warm sunny afternoons. If pods are desiccating rapidly, swathing right away will preserve as much yield as possible.

Light (“Gentle”) frost… above -2°C: Hold off swathing. Check in the afternoon for wilting to make sure frost damage was not heavier than expected. You may see some speckling on the stem and pods, but this is of little concern as long as the plant is still alive. If no wilting, leave the crop standing and check daily.

—If the majority of the seeds remain green and immature, delay swathing to allow for further seed maturity.
—If the pods are severely damaged and are beginning to desiccate, swath during periods of dew or high humidity to reduce the amount of pod shelling and pod drop.