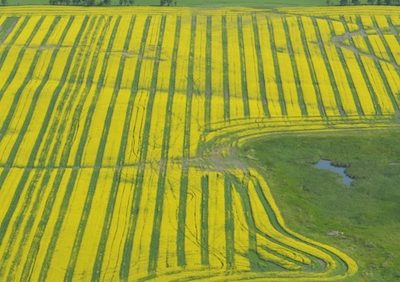 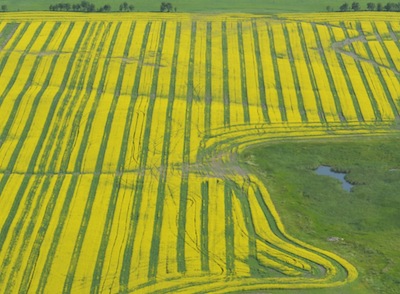 We have reports of lots of patchy uneven canola fields this year. Here are our top 10 reasons, in no particular order.

1. Soil compaction. Soil compaction tends to be worse in fields seeded into muddy soil, and soil compaction could be one reason for patchy fields in the eastern Prairies this year. The freeze-thaw, expansion-contraction (cryoturbation) cycle of winter may be enough to alleviate compaction, especially in fields without a history of compaction problems.

2. Drowned out low spots. This is another factor of a wet spring. Canola plants may have emerged in low spots, but were stunted by subsequent heavy rains.

4. Sulphur deficiency. Sulphur levels tend to be highly variable across a field, so fields with deficient sulphur in some areas can result in patchy growth.

6. Cutworms. Early season cutworm damage tends to occur in patches, and patches set back early may never catch up, producing a patchy crop at harvest.

7. Poor early season stand establishment. This can haunt a crop all season long. Various factors are at play, including variable seeding depth, uneven residue, and excessive seed-placed fertilizer. A crop that does not start off the season with even vigorous emergence can create a challenge for harvest timing.

8. Drill/seeder malfunction. Plugged distribution hoses, mudded up openers, worn openers, broadcast disasters — you name it — created all sorts of messes for seed placement or product distribution. Repeatable patterns through the field are often clear signs of some machinery problem.

9. Clubroot. Clubroot tends to expand through a field in patches created as field equipment moves infested soil from the original source infection sites. The result can be pre-mature ripening in infested patches and later (natural) maturity for other areas.

10. Blackleg. As a new virulent blackleg pathotype overtakes a field, it often starts in small patches and can slowly spread throughout a field unless the grower adopts blackleg management practices. While digging up plants to check for clubroot galls, also clip steps looking for blackleg.

Top 10 reasons for patchy emergence — June 2015
Many situations can lead to patchy canola emergence and growth patterns. Here are our top 10 for this year… 1. Dry topsoil conditions. Soils across many parts of the Prairies were dry all through May and into the first part of June. Emergence tends to be lower and slower in dry conditions. 2. Flea beetles.…
Top 10 reasons for poor-looking canola
Growers in many regions are reporting canola fields that just don’t look as good as usual. Many are thin stands with weak plants and variable stages of maturity. Here are 10 most likely reasons. 1. Excess moisture. This can create all sorts of problems for canola, including poor seed placement, nutrient loss, poor root development,…
Clubroot R breakdown: Preliminary results from 2014 survey
Stephen Strelkov with the University of Alberta tested soil samples from 27 fields in Alberta that were seeded to resistant varieties in 2014 and showed more than expected levels of gall formation. Of those 27 fields, 15 have clubroot pathotypes that suggest the clubroot in those fields had overcome the resistance trait. Preliminary testing indicates…
Did you walk your fields today?
Small and vulnerable canola plants face many threats during their first three weeks. The crop may need your protection to get through these stages with its top-end yield potential intact. Walk the fields a few times a week until the first few true leaves appear and the plants are growing rapidly. After that you may…