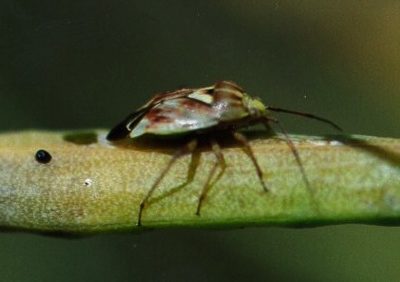 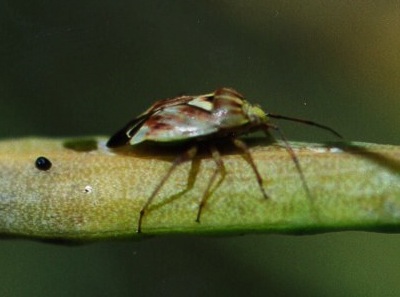 Threshold tables for lygus suggest, for example, that if canola is $12 per bushel and spray costs $8 per acre, the threshold at the early pod stage is 5 lygus adults or late instar nymphs per 10 sweeps.

HOWEVER… Current thinking is that 5 lygus per 10 sweeps (0.5 per sweep) is too few to warrant a spray, and that the economic threshold is likely quite a bit higher. This is certainly the case for canola growing strong with decent moisture.

Wise and Lamb acknowledged this in their research paper used to set the lygus threshold. In “The Canadian Entomologist 130” pages 825-836 in 1998, they wrote: “When precipitation is greater than 100 mm from the onset of bud formation to the end of flowering, the crop may partially compensate for plant bug damage.”

—Rough estimates based on newer evaluation suggest that 50 lygus per 10 sweeps (5 lygus per sweep) at late pod stages could cause a 2 bu./ac. reduction in yield, generally speaking. At $12 canola, a spray at this nominal threshold could save $24 worth of canola, but your time and expenses must be paid for from these two bushels. Also consider trampling of crop and killing beneficial insects.
—This higher 5-lygus-per-sweep nominal threshold is especially applicable at late pod stages when crop is advancing quickly and could be swathed within a couple weeks. Pods at this stage also tend to be more leathery and impenetrable by lygus. In thin crop, sweep netting tends to capture more insects, so numbers in the net may be higher for this reason alone…another reason for the higher nominal threshold in this situation.
—At late flower and early pod stages, the lowest action threshold to consider might be as low as 1-2/sweep. Many agronomists and farmer have moved to higher thresholds based on personal experience.

Pods are the focus. The most vulnerable crop stage for lygus feeding is after flowering and when seeds are enlarged on lower pods. (This would be around stage 5.2 for a dense stand and 5.1 for a thinner stand.) After sweep netting, look for sticky sap spots on pods, pedicels and stems before making the spray decision. Oozing on pods suggests active feeding. If sweep net counts exceed thresholds, but there is no evidence of pod damage, growers could decide to hold off on spraying.

Lygus thresholds for the bud and flower stages are not needed because economic loss is rare at these stages. Research shows that low level lygus feeding at flowering can actually stimulate yield. The only situation where spraying may be warranted at flowering stages is if numbers are so high that large areas of the crop are not coming into flower because the flowers are being eaten.

Rainfall: Rain improves crop growth, lowering the risk from lygus. A heavy rain at podding will also knock lygus to the ground, where ground beetles and other beneficial insects can eat them.

Number of nymphs. Late instar nymphs, the ones with the black dots on their backs, are to be included in lygus sweep net counts. If you are seeing a lot of earlier nymphs, check again every few days. Earlier nymphs do no damage because they are unable to penetrate pods. In warm conditions, it may take only a week for lygus to grow from early to late instar stages. If swathing is a week away and most lygus are small nymphs, these nymphs are unlikely to have time to grow into a threat before the crop is cut.

Other pests present: If lygus are at or above thresholds and other pests, such as diamondback moth larvae, are also feeding on pods and are near thresholds, this combination improves the potential economic return from a spray.

Lygus and cabbage seedpod weevil. The decision to spray for cabbage seedpod weevil is made at early flower. This is too early to see an economic benefit from a lygus spray, so don’t let lygus in the sweep net at CSPW spray timing influence the CSPW spray decision. Make a spray decision based on CSPW numbers only. Spin off benefits in terms of lygus control may occur but cannot be predicted or expected. The adult lygus you find at flower are not the ones that cause economic damage to the crop at the pod stage. The damaging lygus — the older nymphs and resulting new adults — belong to the second late summer generation whereas the previous adults at flower belong to the first late spring-early summer generation.