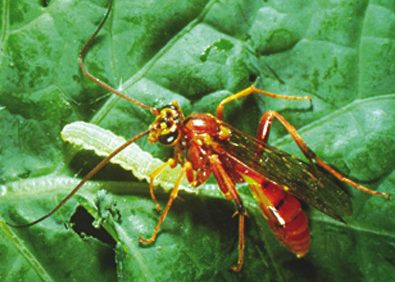 Beneficials. Lygus, bertha armyworm and diamondback moth have a number of natural enemies that will keep populations in check. These beneficial insects may not control an immediate pest threat that has already exceeded thresholds — growers will still have to spray in that case — but beneficials can keep a lid on populations. The key to preserving beneficial insects is to follow thresholds and spray only when necessary. Click here for beneficials to look for while scouting.

Listen to a PODCAST on bees with CCC agronomy specialist Gregory Sekulic.

Cabbage seedpod weevil. Some fields have reached thresholds in southern Alberta and southeast Saskatchewan. To scout, use a sweep net to sample at least 5 spots along the field edge. Click here for scouting tips. Sweep between 11 am and 5 pm (when temps are above 20°C) when the insects will be most active making sweep counts more accurate. If more than 2 per sweep, sample another 5 spots about 150 feet into the field. CSPW will tend to be present in higher numbers in field edges and as they spread out, the number present per sweep will decrease. If you are in a field with variable maturity, sweep randomly and don’t just favor flowering patches. You could easily find elevated numbers in the area that has started to flower, but when the field begins flowering more uniformly, the average number of weevils per sweep will decrease. The economic threshold is 20 CSPW per 10 sweeps generally across the field. Spraying for CSPW occurs during flowering, so consider the bees and beneficials. See Alberta’s latest weevil map.

Cabbage root maggots. If you see sick-looking canola plants starting to wilt, one possible cause is root maggot. Pull up a few and look at the root. Look for tunneling along the root. There is nothing that can be done to control maggots now, but canola on canola can increase the risk. Fields with high maggot populations may benefit from an extended break from canola. Higher seeding rates should be considered to reduce the overall feeding damage on a per root basis. Eliminating a second pass of herbicide has also been shown to reduce overall feeding. A slightly weedy (but not economically significant) canopy can reduce egg laying and the resultant damage from root maggot. The graphs below, from Jim Broatch research, show how root maggot damage to canola drops as monocot weed numbers increase.


Diamondback moth. To scout, pull plants in an area measuring one square foot, beat them onto a clean surface, and count the number of larvae dislodged from the plants. Scout at least five locations per field. The action threshold is 20 to 30 larvae per square foot at the advanced pod stage. This works out to approximately two to three larvae/plant if plant population is close to 10 per square foot.

Red turnip beetles. There has been some spraying near North Battleford for this infrequent pest. Red turnip beetles eat plants from the brassica family only. They move into a canola field from fields sown to canola the previous year and, if necessary, can travel considerable distances to reach a canola crop. The pest is not a common economic threat, but fields have been sprayed this year. Red turnip beetles move slowly, completely devouring canola plants as they move toward the centre from the field’s edge, making the damage obvious from a distance. Targeted sprays are often enough, especially if damage is noticed early.

If more than one insect pest feeding. We don’t have scientific evidence to combine thresholds, but where an “additive” effect of multiple species can make sense is when more than one species are feeding on key yield-producing areas — flowers, buds or pods — at the same time. Read more.

Tank mixing fungicide and insecticide. Tank mixing insecticide with sclerotinia fungicide can work when insects are also at thresholds. If the insect threat to crop yield is low, this insecticide treatment can actually have a detrimental effect on yield. That’s because pollinators are especially active during the flowering stage — the sclerotinia fungicide stage. Some studies have shown pollinators can contribute 13-16% to canola yield. Taking out pollinators with insecticide will reduce this yield benefit, and the spray may also eliminate many beneficial insects that could prevent future outbreaks.

Insect update- DBM, BAW, flea beetles and root maggots
While some areas aren’t reporting much insect activity, there are a few insect hot spots and some regions with insects close to threshold levels. When scouting your canola for insects, go out in early morning or late evening when larvae are mostly active, and try to sample at least five locations (although 10-15 is recommended)…
Root maggots and disease
Root maggots and root disease often show up together in the same field. Root maggots are white and up to 10 mm (half an inch) long — just like maggots. Maggot feeding can damage root crowns and impede water movement, causing wilting. Severe feeding can cause plant death. Severe root maggot damage can occur in…
Insect update: Lygus, bertha armyworm, CSPW
Lygus. There is no threshold before early flowering or flowering as damage at this point is not economical. Research shows that low-level lygus feeding at flowering can actually stimulate yield. The only situation where spraying may be warranted at flowering stages is if numbers are so high that large areas of the crop are not…
Insect update: Cutworms, flea beetles, CSPW, grasshoppers
The 6-leaf lull. At the 6-leaf stage, canola has moved past the vulnerable stage for early season insects and is not yet at the flowering stage when the next vulnerable stages begin. Spraying insecticide at the 6-leaf stage in canola is almost always a waste of time and money, and only hurts beneficial insects. Cutworm…