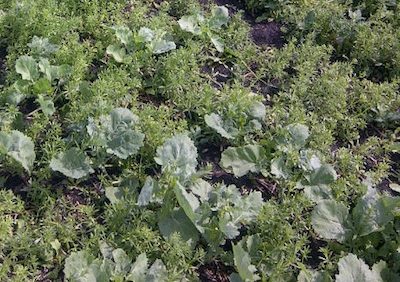 Spraying late or at higher-than-label rates can reduce canola profits.

AAFC research showed an advantage of 3 bu./ac. for controlling weeds at the 1-2 leaf stage of canola versus the 3-4 leaf stage, and a 7 bu./ac. advantage when applied early versus the 6-7 leaf stage. At $12 per bushel, that early control provides $36 to $84 per acre more profit with no added cost. These numbers will be even higher if a preseed burnoff was not completed.

Glyphosate may cost only $5 per litre, which is equivalent to two applications of 0.5 L/acre allowed on 356/360-gram formulations, so applying higher rates does not significantly increase cost of production — but the estimated 3% yield loss from that higher rate applied late can greatly reduce canola profits. If weeds are bigger than the label indicates as a maximum stage, significant losses from competition have already occurred, and control by herbicides will be reduced, leading to poor or negative return on the herbicide application.

Liberty Link: The maximum rate of Liberty is 2.97 L/ac., in two applications — a maximum of 1.62 for the first application and a maximum of 1.35 for the second. Note that the window for Liberty extends to early bolt, which is later than the other two systems.

Clearfield: You can apply any one of these products only once per season: Ares, Odyssey Ultra and Tensile. For example, if you spray Ares, you can’t spray a second application with Ares, Odyssey or Tensile. The window of application is 2- to 7-leaf stage of the crop for Ares and 2- to 6-leaf stage for all other Clearfield partner products. Ares and Odyssey have soil residual components that provide some short term control of emerging shortly after the application. Exceeding these rates can result in soil residues that carry the risk of injuring following crops, even recommended re-crop options.

—If growers use canola as a clean up crop for Group-1 resistant wild oats, narrow-leaved hawk’s beard, round-leaved mallow and other tough weeds, a second herbicide application may be required to do the job.
—If weeds are plentiful, at the same stage or ahead of the crop and the canopy hasn’t closed, these weeds may have a large yield impact. Note however that you’re still required to follow label rate directions even if these large weeds might require a higher rate for control. A pre-harvest product is another option to consider.
—If weeds are at levels too low to influence yield, but are potential grade impacting weeds — such as cleavers — a second spray may pay off if it can do a job on these weeds.

Another option, if you still haven’t made the first pass, is to use a higher registered rate the first time around.