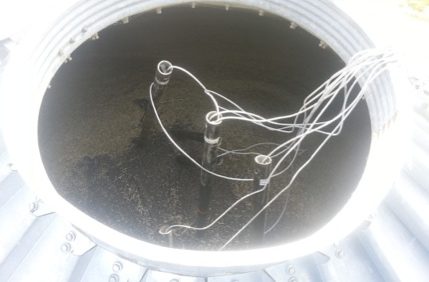 PAMI, with funding from the provincial canola growers organizations, is running a storage project this summer to test the best management practice for canola bins as they move from winter to spring to summer. Should they be turned to warm them up? Aerated to warm them up? Or left alone so they stay cold for as long as possible?

The three treatments are:

Observations as of mid June:

—The core temperature in the turned bin has been slowly declining since it was turned. When a portion of the grain is removed, the grain from the top funnels down through the core of the bin. The grain between the core and the edge of the bin remains relatively unmoved. So, after pulling out 700 bushels, the core of bin 20 was warm (see attached graphic showing the temperature distribution in bin 20 within 2 hours of turning) because this grain was near the top of the bin before turning. The grain at the edges is also warm due to it being near the wall. But the grain between the core and the edge was still cool (approximately -20°C, data not logged). Therefore, the grain in the core is slowly equilibrating to the temperature of the colder grain next to it.

*Thanks to Joy Agnew, PAMI’s research lead on the bin project, for providing this update. See regular updates here.