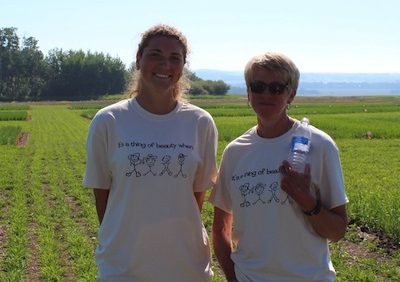 The Canola Council of Canada’s Ultimate Canola Challenge will run trials at 14 sites across the Prairies, testing various crop input products currently on the market. The intent is to see if there is anything above and beyond the crop nutrition best management practices (BMPs) that will help growers increase yields and return on investment. It will help growers make informed decisions, and take some of the pressure off the “random dart throw” decision making technique that is sometimes needed to choose between similar products.

Trials are a repeat of 2013, but with one added twist: At each site, the cooperators will try their own practice or treatment in an attempt to outyield the BMPs laid out by the UCC committee. This “treatment 14” could be anything from two applications of fungicide, or a heavy micronutrient package, or a challenge to the UCC committee’s macronutrient recommendation.

At the beginning of the season, each site is soil tested and a team of experts determines each site’s optimal fertility rates to achieve target yields. From there, the ideal seeding rate, weed removal, fungicide timing and harvest timing are all deployed trying to achieve maximum yields.

Although the ‘extra’ inputs tested didn’t provide a greater return than the BMP’s last year, the CCC decided to run the trials again to see how things shake out if we have less than desirable growing conditions this year.

Some of the treatments include:
-125% N recommendation
-Higher seeding rates
-Micronutrients
-Seed primers
-Stress relief products with herbicide application
-Others

Things have been busy at the Beaverlodge Research Farm!

As far as the UCC trial goes, the last treatment, Boron Nexus, was applied on July 6. A blanket fungicide was also applied around this time as the trial was approaching 40-50% bloom. Like the Lethbridge site, there are no visual differences that can be seen among the plots. Greg Semach, an Agronomy Technician at the Beaverlodge Research Farm, says he is very excited to see what yields end up being.

On July 8, Dr. John O’Donovan and Kelly Turkington toured approximately 60 people through the plots. Here are some pictures from that tour:

The trial site at AAFC Beaverlodge experienced early flea beetle pressure and was sprayed with Decis.

The first application of Agrosolution was applied on June 11. C3 treatment is to be applied this week. The entire trial will be sprayed with herbicide this week.

The BRRG trial site was treated with Penergetic P was sprayed on June 6, Agrosolution application one was applied June 13, and the entire trial will be sprayed for weeds this week.

The MARA trial was seeded on May 23. It is emerging and looking good so far. Treatments have started – more details to come.

Things are looking great at the Lethbridge Farming Smarter site in Southern Alberta!

I’d like to introduce you to the team who looks after everything. The top photo has Ken Coles, general manager (right); Mike Gretzinger, Growing New Ideas Coordinator; and Randi Ashbacher, summer “Spray Boss.” The bottom photo shows the wonderful group of summer students (r-l): Martin, Matt, Randi, and Grayson. 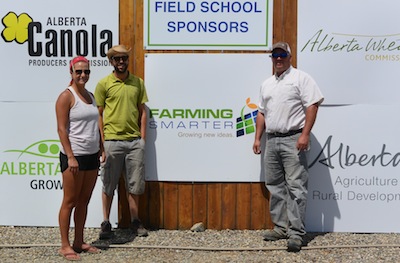 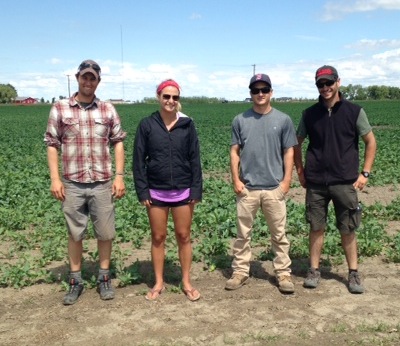 Overall, there has not been a lot of evidence of major differences in the treatments yet. The plots are beginning to bolt, so it will be very exciting to see what happens in the next few weeks. In the meantime, here are a few sneak peek pictures of some of the plots!

The Farming Smarter trial was seeded May 12. In crop herbicide was applied on May 30.

The Farming Smarter trial was seeded May 13.

The NPARA trial at Northstar was seeded on May 29.

The LARA trial was seeded on June 3 and hit cotyledon stage on June 14.

The Outlook Irrigation Crop Diversification Corporation’s Ultimate Canola Challenge trial site was seeded Wednesday May 21 with L252. The corporation is located just outside of Outlook on the southeast side. The 14th treatment they will use has not been decided. They will either go with a post-emergent fertilizer application or a second fungicide application. They decided to wait and see what the season might be climatically. If they choose to apply liquid nitrogen fertilizer then they will time it at the same time as treatment 5 (their soil test recommended nitrogen application was for 11 kg N/ha, so for treatment #5 they will apply 27.5 kg N/ha at late bud/early bolt) but will apply 50% additional N. Alternatively they are planning a second fungicide application, first at flower onset, the second at 50% bloom.

The Prince Albert Conservation Learning Centre’s Ultimate Canola Challenge trial site was seeded June 2 with L261. The field was successfully seeded with the help of the manager George Lewko, chairman of the board Larry White, and field tech Russell Wall. The centre decided against doing a 14th treatment for their trial. The centre is located about 20 minutes south of Prince Albert. (See the map.) 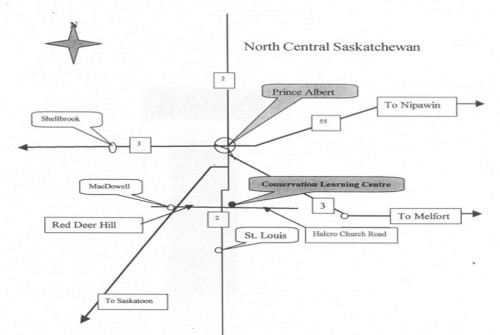 The Scott Western Applied Research Corporation’s Ultimate Canola Challenge trial site was seeded May 21 with L130. The plot was seeded by research manager Laryssa Grenkow and her summer students. They are planning on applying “Blacklabel” as their 14th treatment. Their canola emerged May 30 with decent plant stands. They applied the first treatment May 10. If the weather cooperates they will be doing plant counts this week (end of June). There is some flea beetle activity but they aren’t worried about spraying yet.

The UCC site in Beausejour was seeded on June 7 with a 6 row cone plot seeder (R-Tec) into wet soil conditions. Clearfield 9560 seed was scratched onto the surface. Some rearranging of the plot site now has reps 3 and 4 moved to the east of reps 1 and 2. Last year the site had soybeans on it and volunteer soybeans have been popping up across the trials.

Plants at the site are at the cotyledon stage. The plots are showing areas of high emergence and other areas with very little to no seed coming up. Some yellowing of leaves is apparent, possibly due from excess moisture. There also is some feeding from flea beetles on the cotyledons.

The site has yet to be sprayed due to constant moisture in the area, with more precipitation in the forecast. Treatments for the ultimate canola challenge have not been applied yet. 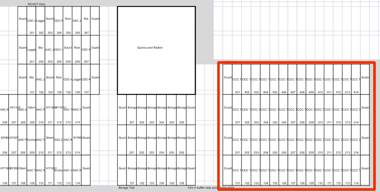 Objective: To determine the impacts of some traditional and less traditional inputs on canola production.

Design: 14 Treatments have been created with 4 replications for each. CPS has supplied the Clearfield variety Canola (either 9552 or VR9560) for the study.

Current Status: Due to wet conditions there have not been any field operations at the Beausejour UCC site. Normal temperatures have been occurring on the South-East side of Manitoba (including Beausejour), while Western Manitoba has seen below normal temperatures. Beausejour has been receiving consistent precipitation events every few days.