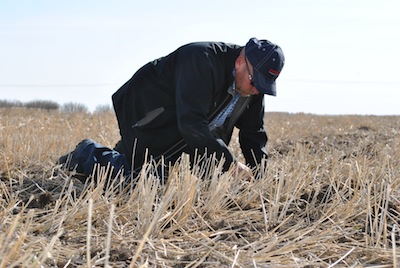 Are cutworms coming to a field near you? In recent years, cutworm outbreaks in the Prairie Provinces have resulted in thousands of acres of cropland sprayed and hundreds of acres completely lost, not just acres of cereals, but also significant canola acreage, as well as peas, other pulses, and specialty crops. Although the most severe outbreaks have occurred in southern Alberta, the biology of some cutworm species, such as the army cutworm, allows them to appear at outbreak populations in areas where they were not an issue in previous years. One of the most frustrating aspects of the cutworm problem is the unpredictability of their outbreaks. Entomologists from across the Prairies are conducting cutworms surveys and are looking for help. Read more: Cutworm Letter 2014 final draft

Seeing lots of seagulls or crows in a field? This is one potential sign that cutworms are in high numbers in that field. You could also take an extra minute, while checking your seeding depth, to take a look for cutworms and wireworms. Wireworms, unlike cutworms, cannot be effectively managed with a foliar applied insecticide and they are not known to cause major damage to canola.

Insect update: Cutworm collection, insect traps
Traps: Diamondback moth and aster leafhopper counts in traps are very low at this stage of the season. Click here for the latest Prairie Pest Update. Collect cutworm samples. Cutworm activity has been light so far this year, with a few fields sprayed across the Prairies. We do expect to hear of more cases as…
Insect update: Wireworms and cutworms
Cutworm survey. The Canola Council of Canada is looking for growers willing to collect cutworms for research. Cutworms are an increasing threat to canola and other crops, and growers will benefit from knowing more about this native pest. At least seven cutworms species can cause economic damage to Western Canadian crops. We often generalize when…
Insect update: Flea beetle scouting, cutworm vs wireworm, DBM monitoring
Flea beetle scouting. Most fields will not require a foliar insecticide for flea beetles in addition to seed treatment, but you want to check to make sure. Begin monitoring right after emergence and through until at least the four-leaf stage. Seed treatment can be effective through most of this period, but slow-starting or slow-growing crops…
Insect update: Flea beetles, cutworms, scarab beetle larvae
A few flea beetles do not warrant an insecticide application. Follow these guidelines when making a flea beetle spray decision: Is leaf area loss more than 25%, on average? The economic threshold for flea beetles is when canola plants over a wide area of the field have 50% leaf defoliation. However, entomologists developed a 25%…