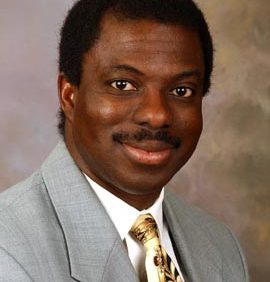 Dr. Vincent Amanor-Boadu with the topic, “Preparing for the Future Food Consumer.” Dr. Amanor-Boadu is an associate professor of agribusiness economics and management at Kansas State University. He received his Ph.D. from the University of Guelph, in Ontario, Canada and worked for nearly a decade as the Director of Research at the George Morris Centre, an independent agri-food think-tank.

Kevin Bleyer on the topic, “The Real Story Behind Writing Fake News.” Bleyer is a multiple Emmy Award winner and former writer for The Daily Show with Jon Stewart. He has worked on many of President Barack Obama’s speeches, including the President’s remarks at the every White House Correspondents Association dinner since his inauguration.

Michael Enright on “Current Affairs.” Enright, host of CBC Radio One’s The Sunday Edition, delivers engaging talks on what is going on in Canada and around the world. He weaves in personal anecdotes from his wide ranging career, and also speaks with authority on issues surrounding the media, including media literacy and the future of journalism.

Anne Frick on “Supply and Demand.” Frick is the senior oilseed analyst with Jefferies Bache, LLC, in New York. She has spent her entire career in futures research, beginning with The Pillsbury Company and then managing E.F. Hutton’s Futures Research Department before joining Prudential Bache, which Jefferies acquired in 2011.


Dr. John Izzo on “Sustainability.” Dr. Izzo advises some of the world’s most admired companies, teaches at major universities, conducts leading-edge research on workplace values, and has spoken to more than one million people around the globe. He has served on the boards of several large conservation organizations, worked with over 100 companies to create more socially responsible workplaces, and was chair of the North American Environmental Caucus at the UN Conference on Development and Sustainability in Cairo.

Dr. Jim Painter on “Sensory Nutrition.” Dr. Painter is a professor at Eastern Illinois University, and has conducted numerous studies in the field of food psychology and mindless eating. He has given presentations worldwide and has made headlines with projects like The Nutrition Analysis Tool and Portion Size Me. His popularity may be due to his simple, common-sense approach to building a healthy food culture.

Cami Ryan on “How Bad Sciences gets Good Legs.” Ryan is a researcher at the College of Agriculture and Bioresources, University of Saskatchewan. Cami critically investigates anti-science networks and how special interest groups develop campaigns to attack specific issues. In particular, she explores the role of social media tools (Twitter, Facebook, etc) as platforms for launching anti-science campaigns.

Ray Zahab on “Challenge. Distance. Discovery.” A former “pack a day smoker,” Ray Zahab has performed many ultra-marathons, including a 2,000-km run across Mongolia and the Gobi Desert in 2013.  Zahab is the founder of impossible2Possible, an organization that inspires and educates youth through adventure learning, and his presentations showcase his challenging adventures, focus on his philanthropic endeavours, and — most importantly — relate the ideas that one life can change the lives of countless others.

Register by January 14 for a chance to win an iPad mini.

Speakers
Click here for the full program. Speakers booked to date include: Peter Mansbridge Anchor, CBC’s “The National” Topic: “Key note address” Peter Mansbridge is one of Canada’s great public speakers. He explores the national mood through key social and political issues, highlighting the accomplishments of Canadians both at home and abroad. Drawing on the world…
Patti Miller to lead Canola Council
Latest News
Tuesday, April 10, 2012 The Canola Council of Canada (CCC) is pleased to announce that an individual with deep experience in agriculture and a strong record of leadership will be the next CCC President. Patti Miller will join the CCC effective April 30, 2012. “We are tremendously fortunate to have someone of Ms. Miller’s caliber…
Speakers and Topics
We have an incredible lineup of world-class speakers ready to talk about key topics in agriculture and business. You can read through their full bios on the convention website.  Drew Dudley: Overcoming silos and finding value in our connections  Dudley’s Ted Talk on everyday leadership has earned 1.6 million views and he’ll talk about how…
Bruce Jowett to Lead CCC Market Development
Latest News
Canola Council of Canada (CCC) President Patti Miller welcomes Bruce Jowett as the CCC’s new vice-president of Market Development. “Bruce brings to the CCC significant experience and proven track record in the agriculture value chain, including primary research, product development, product management and marketing,” says Miller. “Bruce’s marketing expertise will contribute significantly to our efforts…