Home / Canola Watch / Clubroot is a soil problem, not a canola problem 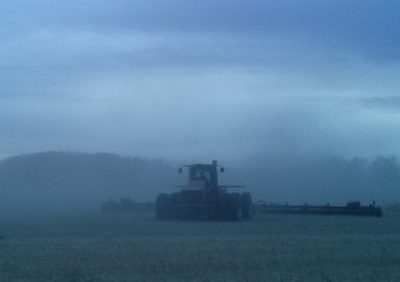 Clubroot-resistant canola is the best tool available to limit disease damage in fields infested with clubroot. However, an effective overall clubroot management strategy has to be top of mind in all years, not just canola years.

As a soil borne disease, clubroot can spread no matter what crop is grown on a field. Any pass with the drill or cultivator, for instance, will pick up and move soil — and, therefore, clubroot spores. Even with a one in four canola rotation, clubroot can be spread all around the farm in the intervening years.

Any brassica weeds, including shepherd’s purse and stinkweed, are potential hosts for clubroot. Patches of these weeds in cereal crops can build up clubroot spore loads in the soil. Just one infected root mass will produce billions of spores that can eventually be spread around the farm through tillage and any other process that moves soils. Weeds don’t have to reach maturity to provide a bridge. It takes 6 weeks from the point of infection for clubroot to produce mature galls and resting spores.

Zero tillage can prevent soil movement by water and wind, and by the simple fact that tillage tools — which can carry hundreds of pounds of soil — are not moving from field to field. But zero tillage has to be practiced in all years, and equipment sanitation has to be performed in all years, to keep the disease contained.

From Saskatchewan Ministry of Agriculture: Clint Jurke’s webinar with on busting clubroot myths.

Moving soil, moving clubroot
The highest risk operation to introduce and spread clubroot is the one that moves the greatest amount of soil throughout the farm and across the countryside. Field equipment carries a lot of soil, which is why equipment sanitation is an important way to contain the disease. Others common ways to move soil include utilities companies…
Top 10 tips from the 2013 International Clubroot Workshop
The 2013 International Clubroot Workshop was last week in Edmonton. Here are our top 10 tips from the event: 10. Stick to known clubroot management steps. See the recipe for clubroot management for details. 9. Know your municipal or county clubroot regulations. 8. People who walk fields as part of their job need to wear new booties…
Clubroot: Messages from Clubroot Response Workshop
The Southern Alberta Clubroot Response Workshop, held in Indus on January 7, was organized by the local the CCC agronomy specialist and Alberta Canola after clubroot was found in the area for the first time in 2018. The 200 attendees were a mix of industry, municipality staff/representatives and growers. At the workshop, attendees were urged…
Bought a used combine? Check it for soil
Clubroot spreads with the movement of contaminated soil, and the most common way to transfer soil from field to field is on farm machinery and vehicle tires. Buying used equipment from a clubroot area can create an unexpected transfer of the disease. We heard this week of a grower from northern Alberta who bought a…