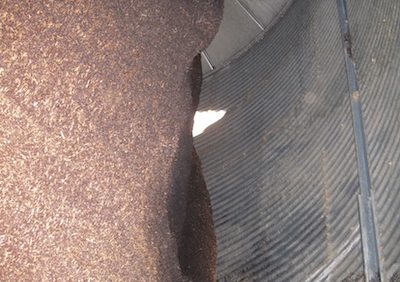 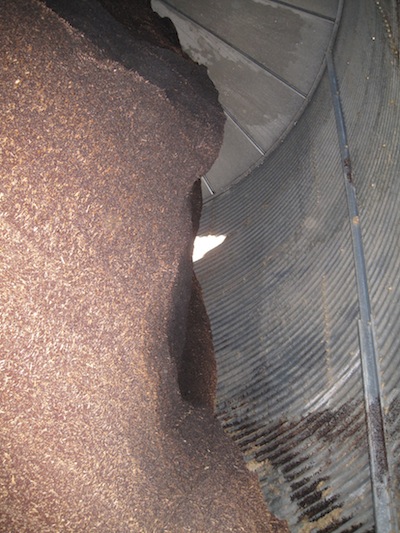 Harvest is well underway, so the big issue this week is to make sure canola is safe in storage. You don’t want to end up with a bin like the one above. All canola should be conditioned in the few days after harvest to make sure it cools down. If you have aeration fans, turn them on right away and leave them on until canola drops to at least 15°C. If you don’t have aeration, move the canola from one bin to another, or remove one third of the canola in a bin to check its temperature. See our Top 10 for more tips.

Late canola still standing will face higher frost risk with each passing day. Leave immature canola standing as long as possible, and be prepared to swath right after the first killing frost. Swathing might not be necessary after a light frost. That’s why a post-frost assessment is important.

Here’s the full link from the tweet: Earn an extra $1,920 per quarter

Issues of the week
Turn on the aeration fans and leave them on. A lot of canola went into bins hot, and one crusher has already received some 2011 canola with 18% heated seed. With hot weather forecast again this week for some areas, conditioning canola is a top priority. Wait a few hours after a frost before making…
Issues of the week
Clubroot galls have been found on canola plants in two separate fields in Manitoba. The photo above shows one of the actual infected plants. There is quite likely more clubroot across the province. Alberta experienced an increase in clubroot intensity and geographic spread this year. Saskatchewan’s disease survey report will not be available for a…
Issues of the week
Frost hit many parts of the Prairies last night and earlier this week. The big questions for growers are: How soon after a frost should I swath? Or if I was lucky enough to miss this frost, do I go ahead and swath canola now to avoid the risk of the next one? The answer…
Issues of the week
Swathing will likely start within a week or 2 for earliest canola fields. Keep in mind that the ideal time to swath is around 60% seed colour change (SCC). Some fields will have to be cut earlier for growers with a lot of canola to get down, but try to avoid cutting before 30% SCC.…