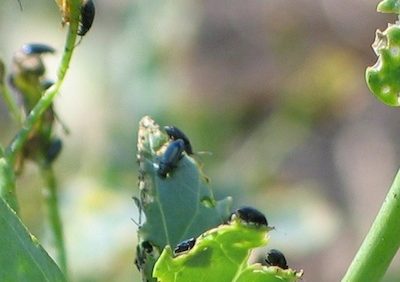 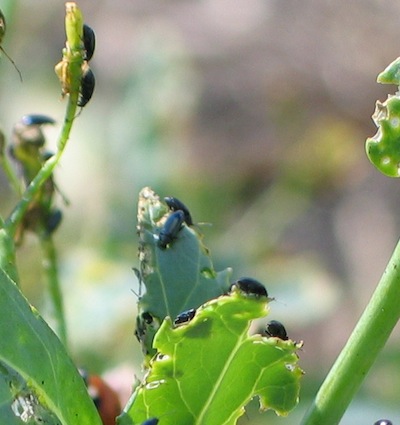 Growers are still seeing some insects in their canola crops, including a higher than normal presence of flea beetles. Answers to the following three questions may help with management decisions.

1. At what stage is canola no longer at risk from insect damage?

Most insects prefer to feed on lush, green tissue. Piercing/sucking insects such as lygus and aphids are physically incapable of penetrating tissue that is starting to dry. Chewers such as grasshoppers or flea beetles prefer to feed on green tissue that allows them a quick escape route such as exposed leaves. Bertha armyworms will move from drying material to greener fields. When is canola past risk? Depends on the insect, time of year, neighbouring crop susceptibility, and current weather conditions. Once seeds in lower pods start to turn colour, further damage is unlikely. Growers considering a late application are reminded to check the pre-harvest interval before choosing an insecticide.

2. If late-season flea beetles are 100% crucifer species, does that mean they’ll be mostly crucifer next year?

Not likely. Several researchers have found that P. striolata (striped flea beetles) numbers are usually higher in the spring than in the fall, while the reverse is more often the case for P. cruciferae — the most common all-black species. AAFC Saskatoon entomologist Julie Soroka says she is seeing higher numbers of P. striolata in the fall than she used to, she says P. cruciferae is still usually the dominant fall species.

3. If these late season flea beetles overwinter as adults and start feeding on canola seedlings next spring, would it be worthwhile to spray them now to reduce the spring population?

Thanks to Julie Soroka with AAFC in Saskatoon for these answers.