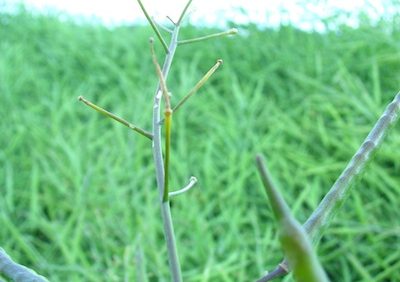 Some canola fields are exhibiting missing or stunted pods at the top or middle of stems. Pods in some fields have been described as green on the ends and translucent in the middle. The most likely cause is environmental. The few days above 30°C in early July would certainly cause flower abortion, and the hormone response to a couple days of heat could stretch the effect on podding to a week or more.

However, other factors can be at play. If more than 10-15 pods are affected, quite likely something else piled on to extend the damage. Take a look at neighbours’ fields or other fields on the farm. If pod damage is not evident on these fields and they were flowering at roughly the same time, environmental damage can be ruled out as the only factor. Herbicide effects from drift, tank residue or late applications can cause flower abortion and thus missing pods. This would be the next most likely factor. Group 2 herbicide damage can also include leaf necrosis (browning) and twisted stems.

Take a close look at herbicide records, including the potential for Group 2 carryover in the tank or sprayer plumbing. Late glyphosate applications that go on at bud or flowering stages can also damage flowers and pod development.

The good news is that canola plants can compensate by flowering longer and producing more pods. With a long open fall, these late-forming pods provide a large contribution to yield. However, with an early fall, these late pods may not mature, causing a higher green count.

For more on heat damage to canola reproduction, view this archived webinar by Murray Hartman of Alberta Agriculture.

For more on other causes for missing pods, read this article from Canolab.

6 causes for missing pods
Seeing stems with lots of blanks where pods should be is often cause for alarm. There are many possible factors. Here are the top 6: Heat. Hot days (28-30°C and…
Missing Seed or Missing Pods – What Happened?
As harvest gets underway across the prairies there are the usual questions about missing pods on a plant and missing seeds within pods. Missing pods means that something interrupted the…
Missing pods can have many causes
Missing pods can result from any stress on the plant. Any stress can inhibit proper fertilization of the flowers. In many cases the cause may seem obvious, but it is…
Why the missing pods?
Alberta Agriculture oilseeds specialist Murray Hartman and CCC agronomy specialist Dan Orchard, in their station at CanoLAB Saskatoon, demonstrated 7 causes for missing pods — “blanks” — on canola stems.…