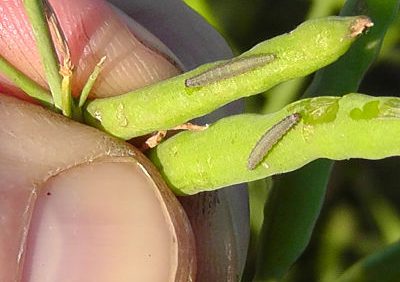 The most accurate method to estimate diamondback moth population density in canola is to count larvae in several locations throughout the field, and determine the average population per unit area.

Scout fields in July and August. Monitor crops at least twice per week.

To scout, pull plants in an area measuring one square foot, beat them onto a clean surface, and count the number of larvae dislodged from the plants. Scout at least five locations per field.

Action Threshold:  20 to 30 larvae per square foot at the advanced pod stage. We’re still early. This works out to approximately two to three larvae/plant if plant population is close to 10 per square foot).