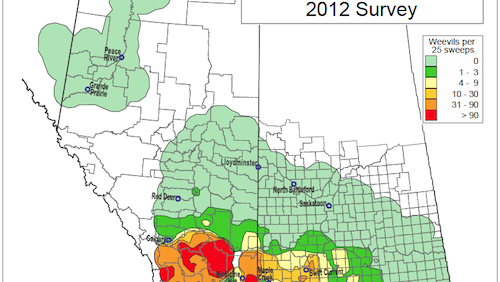 Cabbage seedpod weevil numbers are high in some regions of southern Alberta and southwestern Saskatchewan. Growers and agronomists are encouraged to scout canola fields, and follow these management decision-making guidelines:

1. Spraying cabbage seedpod weevil (CSPW) when canola is at the bud stage provides no economic benefit. The goal is to stop adults from laying eggs in newly formed pods. CSPW don’t do their damage until pods are at least 1” long — so aim to spray just prior to that stage, at about 20% bloom.  Also, if you spray too early, you may have to go back in with another application (and you can’t spray the same product twice in one season so you may be putting later season insect control in jeopardy). Note: Adults
have been around for 2 months and are coming to the end of their lifespan. As they get old, they won’t lay as many eggs. Adult numbers should start to drop off.

2.   Use a sweep net to sample at least 5 spots along the field edge. Click here for tips on how to use a sweep net. If more than 2 per sweep, sample another 5 spots about 150 feet into the field. CSPW will tend to be present in higher numbers in field edges and as they spread out, the number present per sweep will decrease. If you are in a field with variable maturity, sweep randomly and don’t just favor flowering patches. You could easily find elevated numbers in the area that has started to flower, but when the field begins flowering more uniformly, the average number of weevils per sweep will decrease.

3. The economic threshold is 20 CSPW per 10 sweeps generally across the field. Do not apply insecticide when you have not reached threshold levels.  Keep in mind that economic thresholds for CSPW aren’t linear. As the price of canola goes up, you should not decrease the threshold of CSPW per sweep at the same rate. A few insect pests in the field can actually benefit canola because plants stimulated by low levels of damage will overcompensate for that damage.

4.  When you spray an insecticide, avoid peak sunshine hours of the day when bees and other beneficials will be most active in the field. Note that some of the common CSPW registered products are synthetic pyrethroids that can lose efficacy at higher temps. This is another reason to spray later in the day.

If the economic threshold is reached for CSPW and you also need to spray fungicide for sclerotinia stem rot management, holding out CSPW control until 20-30% bloom provides an opportunity to tank mix insecticide with fungicide application and still get control of CSPW.