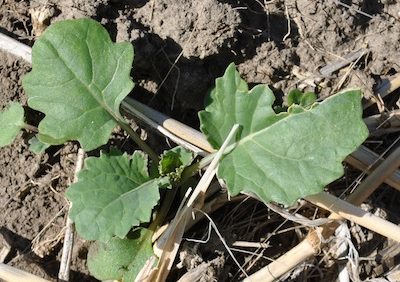 CCC agronomy specialists have a new project for 2013 — the Ultimate Canola Challenge (UCC). The underlying challenge is to follow all best management practices (BMPs) to see how canola yields when you “do everything right.”

Alberta has 9 sites, spread throughout the province. Each site will have a ‘check’ with BMPs determined by CCC agronomists along with extension and AAFC specialists. Along with the check, additional treatments — such as boron — will be evaluated to see if they provide an improvement in yield, quality, maturity and return on investment. If UCC results uncover something extra or new that seems to work, it could lead to future research projects. Funding for the UCC sites in Alberta is provided through the Alberta Canola Producer Commission as part of their Growing with Canola Extension Funding for Applied Research Associations.

The UCC Lethbridge site received some much-needed rain last week! Most of the plants are now in the 2-4 leaf stage and they will be sprayed with a blanket herbicide application today or early tomorrow. Some plots have slightly reduced growth where there was more residue, but overall the best looking treatment at this point is the higher seeding rate (150 seeds/m2). Farming Smarter staff have done 2 sets of plant counts and they will continue to do weekly plant counts in an effort to capture any differences between treatments throughout the growing season.

Lethbridge plots were seeded into a quarter section field of canola and unfortunately the rest of the quarter is under attack from thousands of gophers. Thankfully the Farming Smarter team has been trapping gophers like mad, and because of their efforts the UCC plot area has very little gopher damage compared to many areas in the field. However, we do have some damage — as the photo shows.

Lacombe Research Centre
At Lacombe, we seeded the Canola Input Demo Trial (test 75) on May 15. A day later we applied the pre-seed burnoff (glyphosate at 900 g ai.e./ha). The variety is a new Liberty Link hybrid, which doesn’t have a name yet, on barley silage and the moisture was good considering the lack of rain. Ten days after seeding we received over an inch and half of much needed moisture.

When we toured the trial on May 27, the canola was coming up evenly and is at the cotyledon stage. There isn’t any insect damage yet, however we need to keep an close eye on it for flea beetles and cutworms. The wet weather may control them. Next week the canola will probably be at the 1-leaf stage and will be ready to have the Penergetic P applied. The first in-crop counts were done today (May 28).

Northern Sunrise County (Nampa, Alberta)
The site had a pre-seed burnoff May 16 and seeding commenced May 17. After consultation with our group it was decided to go with 90 lb./ac. of N, 30 lb./ac. of P, 20 lb./ac. of K and 30 lb./ac. of S as this is a standard blend for us this year and would keep us from making mistakes. We used our plot drill and made two passes per plot to make larger plots, leaving a space between plots large enough to access plots with hand booms for spraying. Plots went into barley stubble.

We had excellent moisture and received a 5mm rain shower on May 21, so establishment is expected to be excellent. The site has not been in canola for over three years (a rarity in our area) so volunteers should be minimal. Our 73-15 canola should be mature early enough for harvesting in the unpredictable South Peace region

M.D. of Big Lakes (High Prairie, Alberta)
We attempted to seed on May 19, but the farmer had run some sort of rototiller over the pea stubble and we found the site dry, lumpy and very uneven. We returned the next day, May 20, with a land leveler and were able to make a suitable seed bed for shallow seeding. The site was dried out by the tillage application and was seeded at around 1 cm. The soil is a sandy loam, (“lake bottom” by the local vernacular) and with the rain shower on May 21, we should have good emergence at this site as well. We used the same fertility as the Northern Sunrise County site and are looking forward to seeing results from the treatments as well as the comparisons between different varieties. The variety at this site is L130, selected to match the producer’s InVigor canola surrounding it.

Lethbridge:
The Lethbridge site is starting to emerge but it is getting pretty dry. If we don’t get the rain forecasted for this week they will start irrigating.

On May 5th, the Lethbridge Farming Smarter site received a pre-seed burndown and on May 11th it was seeded. The plots went in on a pivot of barley stubble that is located just south of their main research plots (on the other side of the Jail Road). The Lethbridge plots were seeded 1/2″ to 3/4″ deep at a rate of 100 seeds/m2 into fair moisture conditions.

Earlier this spring, Farming Smarter took soil samples and had them analyzed. A team of ARD and CCC agronomists reviewed the results and at seeding, the plots received 46 pounds of N, 40 pounds of P and 15 pounds of S. The Lethbridge site lost 5 plots to a plugged fertilizer run, so they will be discounted from the results.

In total, Farming Smarter Lethbridge will apply 13 different replicated treatments, as per the UCC Alberta protocol. Treatments will include extra urea, UAN, increased seeding rate, seed primers, micronutrients, and more! The challenge is on, and we will be updating our blog as new treatments are applied and as measurements are taken. Stay tuned!

Neerlandia
The Neerlandia site was seeded May 17. The warm soil will likely provide quick emergence, and everything went according to plans. The crew at Gateway Research Organization (GRO) did a great job seeding, with very little trouble to report.

Burnoff was done the day after seeding. The farmer went over the entire site with Roundup which saved us much time. Volunteer canola was InVigor from two years ago.

The target yield of 60 bushels an acre will need help from Mother Nature, but stay tuned to see what the experts recommend for management throughout the growing season. Murray Hartman, Neil Harker, Scott Meers, GRO, Canola Council Agronomists and others will collectively make management decisions at this site. Summer tour dates will be announced soon!

Medicine Hat:
On Thursday, May 16th, Farming Smarter seeded their Medicine Hat site into barley stubble under dry conditions. The 13 replicated treatments used across Alberta UCC are repeated at the Medicine Hat site. They were all seeded at 1/2″ to 3/4″ deep (just touching moisture). Except for treatment #7, which was seeded at 150 seeds/m2, all of the plots were seeded at 100 seeds/m2.

The plots received 65 lb./ac. N and 40 lb./ac. of P at seeding. Sulphate was unavailable at the time of seeding so it will be broadcasted this week.

The site was fairly clean but it still received a pre-seed burndown on the day of seeding. At this point we’re just hoping for rain!

Beaverlodge
The Beaverlodge site was seeded May 16, following a pre-seed burnoff with 900g ai/ha of glyphosate. The seeding went well, though our soil conditions are very dry and will require rain to ensure good emergence.

Forestburg
Battle River Research Group (BRRG) completed seeding their UCC plots on May 16. This main fertilizer rate was 90 lb./ac. of N, 25 lb./ac. of P, and 15 lb./ac. of S through a Technotill opener on 9” spacing. Seed went in slightly deeper than the desired 1/2″ to 3/4”, but the warm moist soil should allow for adequate emergence from 1”.

The yield target for this site is 50 bu./ac., and with the soil sample showing very high base fertility levels, we just need a little help with weather and we should hit our target! As with the other UCC sites in Alberta, Murray Hartman, Neil Harker, Scott Meers, BRRG, Canola Council Agronomists and others will collectively make the management decisions. Stay tuned for Summer Tour date announcements.