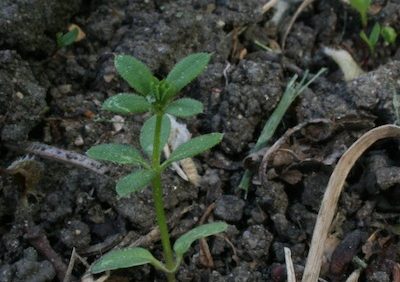 This is our first attempt at a “Top 10” list. Herbicide tolerant (HT) canola systems have made weed control in canola much easier, but certain weeds still present challenges. These are “decision driver weeds” — weeds that have a limited number of appropriate products or tank mixes that would provide consistent control.  Many of these weeds require integrated weed management across years and throughout the crop rotation.

Cleavers. Overwintering cleavers seem to be fairly common this spring, and there is growing concern with cleavers in delivered canola. The half-litre rate (180 grams of active per acre) of pre-seed glyphosate is not likely enough for winter annual cleavers. The one litre (360 gae) rate is better, and if cleavers and other winter annuals are larger, a 1.5-litre (540 gram) rate may be required. The key is to determine weed staging. Dig up a few. Those with large established roots are probably winter annuals or biennials and will need a higher rate. If cleavers and other weeds are small and look like they germinated in the spring, a lower recommended rate may be enough.

Kochia. Kochia tends to be more common in the southern Prairies. Glyphosate resistant kochia was confirmed in southern Alberta in 2011 and in southwest Saskatchewan in 2012. Growers with glyphosate-resistant kochia can control it ahead of canola using the high rate of CleanStart. Non-Roundup Ready canola varieties also provide options for in-crop control, although kochia is best controlled when very small. Another management option is to return to the application and incorporation of Edge prior to seeding. Tips to control hard-to-wet weeds.

Canada Thistle. Canada thistle is 3 to 4 times more competitive than wild oats. Ten shoots per square metre can cause a 10 bu./ac. yield loss in canola. Get thistles under control in cereals so they’re easier to manage in canola.

Late summer or fall applications of glyphosate are typically regarded as twice as effective in managing perennial weeds like Canada thistle, sow thistle, and dandelion. In the fall these weeds are actively moving sugars into their roots for energy storage to survive winter and therefore also move herbicides efficiently into their root systems as well, where newly forming buds for future growth are killed. Control Canada thistle in the fall before high value crops such as canola for the greatest economic benefit.

Even with a fall application, spring applications may still be required but in-crop may be enough. Managing patches will go a long way in preventing outbreaks. In canola, check label rates before spraying these weeds. Higher label rates may be required for these perennials.

Narrow-leaved hawk’s-beard. These are best controlled in the fall or very early spring before they begin to bolt. Mixes of glyphosate and Group 2 mixes (Express, Priority or PrePass) are most effective. Phenoxy herbicides such as 2,4-D or MCPA applied in the fall actually antagonize the activity of glyphosate applications made the following spring. Glyphosate applied alone at 180 gae per acre very early in the spring prior to the beginning of bolting, is very effective in controlling overwintering narrow-leaved hawk’s-beard.

Dandelions. Dandelions, like Canada thistle, are strong competitors. These are best controlled in the fall, but very early spring is the next best timing. Research on dandelion control prior to wheat showed that applications made pre-bloom (< 30% bloom) provided the best yield response, even if dandelion was not as effectively controlled as later timings. The best control of dandelion alternated between pre-bloom and full bloom, possibly due to temperature at the pre-bloom application timing in various years for the project.

Stinkweed. Stinkweed is fairly easy to control if sprayed in the vegetative stages. If not controlled it grows very quickly and will draw aggressively on resources that would otherwise be available for the crop.

Stork’s bill. Stork’s-bill is aggressive and can escalate quickly if missed. Two passes are often required when this weed is present. Make every effort to target stork’s-bill in cereals.

Top 10 weeds to watch for this fall
10. Toadflax, biennial wormwood, scentless chamomile, narrow-leaved hawk’s-beard and stork’s bill are lumped together because they should be on the list, but did not make the top nine. 9. White cockle. This weed is not widespread across the Prairies, but it is awful where found in central and northern Alberta, and seems to be getting…
How to prevent selection for herbicide-resistant weeds
The first few weeks of the growing season is a great time to police fields for suspicious weeds. Look for weeds that lived through the pre-seed burnoff or post-emergent sprays while others of the same species have died. These few weeds could be resistant to one or more herbicide groups, and it would be good…
Fall weeds, white seed, green seed
October 6, 2010 Perennial weeds such as Canada thistle, dandelion, and quack grass are best controlled in the fall because these plants are moving nutrients down into their roots for winter. This is their most susceptible growth stage. Often by October it’s too cool for effective fall weed control with glyphosate. But with a stretch…
Weeds: Foxtail barley | Glyphosate-resistant kochia
Early weed control is as important as early seeding for crop yield potential. This is a good time for a pre-seed burnoff for general weed control. Here are some specific weed issues to think about. Foxtail barley heavy in fields unseeded in 2011. Foxtail barley has proliferated in some fields that were unseeded last year…