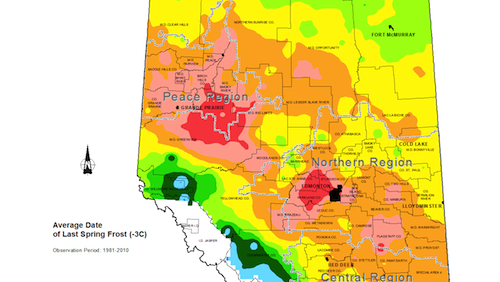 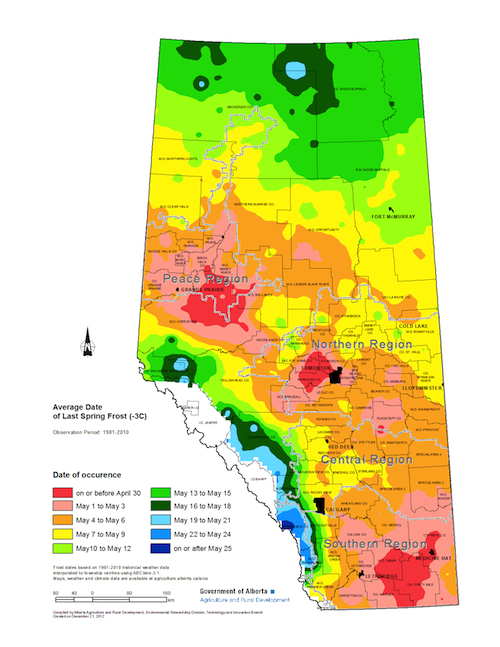 A mild spring and little snow has given growers in Southern Alberta an opportunity to seed canola early again this year.

Seeding canola early is generally the best bet for higher yields, but how early is too early depends on an individual grower’s appetite for risk. Growers have to find a balance between two factors. One, that seeding earlier increases the chance of a killing frost on seedlings, and two, that a canola crop established early is also more likely to avoid major yield damaging heat stress during the critical bud to mid flower stages in summer.

The average date of the last -3 C frost — a temperature that can kill canola seedlings — is May 1-3 for Lethbridge, and ranges from April 30 to May 9 for the whole Southern Alberta region, according to AgroClimatic Information Service maps from AARD.

Early seeding usually improves canola yield potential and quality, but these benefits depend on survival of a sufficient plant population. An early-seeded crop that is thin and uneven because of cool soil temperatures or a damaging frost is less likely to meet yield and quality expectations.

When seeding in mid April in Southern Alberta, keep the following points in mind to improve crop establishment:

Soil temperature. Seeding into 10 C soils is optimal but not practical most years. Canola can germinate at soil temperatures of 2 C, but seeding into soils that are too cool can add significant stress to seedlings, extend the germination period, and reduce seedling survival. If soils are below 8 C in the seed zone this week, but forecasts are for much warmer temperature the following weeks, then seeding into cool soils may work.

Use this time to control weeds. If winter annuals have started to grow and annuals are germinating, it is best to control them early. Research shows that early weed control provides a greater yield benefit, even if growers don’t intend to seed that field for a couple weeks.

Soil type. Making use of available spring moisture may be more critical on coarse textured soils with less water holding capacity. Sandy soils have a lower risk of compaction from heavy rains than soils with higher clay content. This is important to remember as compaction also results in stressed seedings, especially if temperatures are cool.

Seed treatment. Seed that takes 2-3 weeks to emerge may not have much seed treatment protection left. Scout often for flea beetles if emergence is delayed.