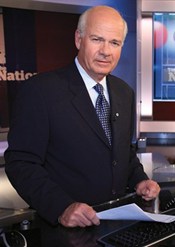 Click here for the full program. Speakers booked to date include:

Peter Mansbridge is one of Canada’s great public speakers. He explores the national mood through key social and political issues, highlighting the accomplishments of Canadians both at home and abroad. Drawing on the world leaders he’s interviewed, Mansbridge also talks about leadership: what it takes and how it can be achieved, whether in politics, academia or business.

Dashan (Mark Rowswell)
Topic: “A Foreigner But Not An Outsider: Insights Into China”

Dashan, a.k.a. Mark Rowswell, has been called “the most famous foreigner in China”, where he has worked as a performer, television host and cultural ambassador for over 20 years. Although relatively unknown in the West, it’s hard to find anyone in China who does not know of Dashan. In 2012, Canadian Prime Minister Stephen Harper named Dashan as Canada’s Goodwill Ambassador to China. Dashan is active in public speaking, sharing his experiences in learning Chinese, on cross-cultural issues, and on changing culture in China.

As Washington bureau chief for The Globe, Ibbitson witnessed the attacks of September 11. As Ottawa political affairs columnist, he wrote on the vicious civil war between Paul Martin and Jean Chretien, the rise of the Conservative Party, and Stephen Harper’s 2006 election victory. And then he returned to the United States, to offer unparalleled coverage of the historic 2008 election, and Barack Obama’s opening months as America’s first black president. Now, he’s back home, just in time for another crucial period in our nation’s history. Ibbitson brings this breadth of experience to explaining his contention that Canadian power is shifting from the Eastern “establishment” to new Canadians and the West.

Dr. Sloan is the president of Sloan Trends Inc., a California-based consulting firm specializing in food and nutritional trend-tracking and predictions. Dr. Sloan draws on her extensive background in food science, PR, marketing and journalism to provide insightful commentary on shifting consumer trends in the global food industry.

Dr. Fry was educated at Oxford University, where he obtained an MA in Mathematics and a Doctorate in Economics. After teaching Economics at Magdalen College, Oxford University, in 1980, Dr Fry jointly founded LMC International, and is the company’s chairman. He continues to devote almost all his time to the company’s research and consultancy activity and he is in overall charge of its work in commodity-based sectors.

Speakers and Topics
We have an incredible lineup of world-class speakers ready to talk about key topics in agriculture and business. You can read through their full bios on the convention website.  Drew Dudley: Overcoming silos and finding value in our connections  Dudley’s Ted Talk on everyday leadership has earned 1.6 million views and he’ll talk about how…
Speakers
Dr. Vincent Amanor-Boadu with the topic, “Preparing for the Future Food Consumer.” Dr. Amanor-Boadu is an associate professor of agribusiness economics and management at Kansas State University. He received his Ph.D. from the University of Guelph, in Ontario, Canada and worked for nearly a decade as the Director of Research at the George Morris Centre,…
CCC statement on the appointment of an Ambassador to China
Latest News
September 4, 2019 “We’re very pleased to see a well-respected business leader who knows agri-food appointed as Ambassador to China. Mr. Barton has been clear on how agri-food is a key driver of Canadian growth. We look forward to working with Mr. Barton to restore canola exports, which has been Canada’s number one export to…
Rise & Shine in Palm Springs!
Have you registered for the CCC’s 51st annual convention, taking place March 6-8 in Palm Springs? If not, act quickly as the deadline to book a room at the hotel is this Friday, February 9. The convention is a dedicated time for the entire canola value chain to be together in one place to connect,…