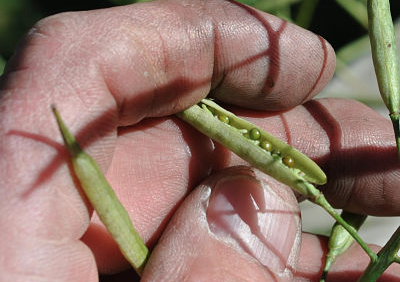 You’ll want to check on standing canola the morning after a frost, but wait at least 4-6 hours after frost to allow the full extent of severe frost damage to become evident. The crop may look undamaged that morning but by lunch time, wilting, desiccation and pod splitting may begin. If you scout early and then not again, you may underestimate the damage and miss a chance to swath now to save some of the yield. Conversely, light to moderate frost damage may take longer to become evident, so scout again after 2 to 3 days to reassess and make a decision.

If most or all seed is mature and you planned to swath the day after a frost anyway, then don’t bother waiting 4-6 hours. Just start swathing.

Crops not ready to swath before the frost, may have to be swathed after the frost. Here are two scenarios:

If you had a heavy frost… below -2 C: Assess the damage in early afternoon. Check pods for a white, wilted  appearance. Pod shatter and pod drop could begin within a day, especially with warm sunny afternoons. If pods are desiccating rapidly, swathing right away will preserve as much yield as possible.

For canola with high seed moisture, frost in excess of -5 C is generally lethal, resulting in non-viable seed. At such low temperatures, ice crystals physically disrupt structures such as membranes and enzymes. Pods of immature canola crops frozen at lethal temperatures have been observed to turn black, whereas mild frost turns pods white or white-speckled.

If you had a light frost… above -2 C: Hold off swathing. Check in the afternoon for wilting to make sure frost damage was not heavier than expected. You may see some speckling on the stem and pods, but this is of little concern as long as the plant is still alive. If no wilting, leave the crop standing and check daily.

What to look for during daily monitoring:
—If the majority of the seeds remain watery, delay swathing to allow for further seed maturity.
—If the pods are severely damaged and are beginning to desiccate, swath during periods of dew or high humidity to reduce the amount of pod shelling and pod drop.

If 50% of the field has moderate to severe damage, there’s a risk that hardest hit plants will begin to shell out and any seed that can contribute to yield will be lost. However, the yield and quality of the seed in this part of the field has likely already been significantly reduced. If the remaining 50% of the field has light to minimal damage, swathing too early may further reduce yield and grade. Leaving the field standing and following it to
the proper stage for swathing can allow the remaining intact seed to clear green and continue filling, improving both grade and yield. This part of the field will likely contribute most to yield anyway, and anything severely damaged will likely shell out or be separated with the chaff or dockage.

When the field is more than 50-60% severely damaged, the crop will shell so it is best to swath to protect any viable seeds. Quality is likely to be poor anyway, so it is more important to protect as much yield as possible. Once swathed, rainfall with warmer temperatures (>15 C) may allow for some enzyme activity to occur in any remaining intact seeds, which can reduce the percentage of green seed. If the decision to swath is made, the
field in question should be one of the last fields to be harvested to allow as much time for green seed clearing as possible. Since yield and grade are likely to be relatively poor, the risk from leaving the crop out will be lower than for other less affected fields.

The field has light to moderate damage in portions or across the field. It is suggested that this field be left for swathing at the proper stage of maturity, based on remaining healthy seeds in the pods. Any seeds that are damaged will be shriveled and will typically blow out of the combine with the chaff or end up as dockage. In order to maximize economic return, the crop should be left for as long as possible before combining. Areas of moderate damage should be monitored regularly for pods becoming desiccated and prone to shattering. If this occurs, consider swathing either the whole field or just the affected areas, if that is practical.

After light frost, wait a day then assess
Growers often wonder whether to swath right away after a light frost of minus 1°C or minus 2°C for a couple hours. Before doing anything, wait a day or two…
After frost: Start monitoring 4-6 hours after frost ends
Wait 4-6 hours after frost to start monitoring and then keep checking. If you check too early after a frost, the full extent of frost damage may not be evident.…
Frost: Take patient approach to swathing
Except for some areas of the Peace region, which got as low as -5C or -6C on the B.C. side, most frost across the Prairies over the past week was…
Frost hits standing canola: What to do?
Check standing canola the morning after a frost, but wait at least four hours after frost to allow the full extent of severe frost damage to become evident. The crop…