Home / Canola Watch / Diseases to look for while harvest scouting 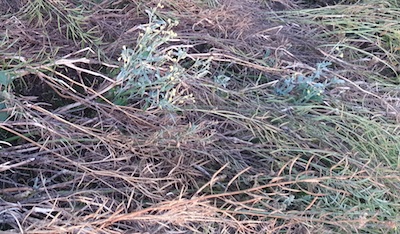 Pre-harvest is a good time to scout for disease severity. Here’s what to look for:

Sclerotinia stem rot
—Look for areas in the field with lodged or prematurely ripened plants.
—Examine the basal (bottom) to middle of the stem. Sclerotinia leaves a bleached or tan lesion on the stem. In serious cases, white, downy growth appears on green stems, and as the stem dries, it will be bleached or brown (like a bone) and shredded typically around the entire stem.
—If you break open the shredded stem, you may find hard, black bodies (typically similar in appearance of mouse droppings but larger), inside the stem or on the ground near the stem.
Canola Encyclopedia section on sclerotinia stem rot


Blackleg
—Look for areas in the field with lodged or prematurely ripened plants.
—Examine the basal (bottom) to middle of the stem. When blackleg is severe enough to cause yield loss, the plant will have irregular, knotty, woody cankers at the base of the stem.
—Black pepper specks (picnidia) may appear within the lesions.
—This infection will eventually grow through the stem, cutting off nutrient flow. If you see plants drying up, cut a few open to check. Slice through the stem at the base or through the canker to determine if discoloration is present within the stem, and what proportion of the cross section of the stem is affected. If more than half the area of the stem is darkened by the fungus then the yield of that plant is more likely to have been reduced by the disease.
Canola Encyclopedia chapter on Blackleg

Alternaria
—Alternaria black spot is rarely a problem in argentine (B. napus) canola when it is alive. Some superficial infection that grows as the plant senesces may turn swaths black. Alternaria tends to be more damaging in juncea or rapa canola. In these crops, alternaria infection will move up the plant, eventually reaching the pods. When infected areas make up 50% or more of the crop, swathing early may be the best way to salvage the yield in those infected plants if a large proportion of pod surfaces are covered with the black spots. Otherwise diseased plants will shell out if left standing while you wait for healthy plants to be ready. If healthy plants are showing some color change or if the seeds are at least firm, they should mature in the swath.

Aster yellows
—Common symptoms include the malformed bladder-like pods, which produce little to no yield. The disease can also result in normal looking pods that contain only a few misshapen seeds. Other symptoms include sprouting in the pod, which is typical of aster yellows, and purplish plants and pods, although this purpling can result from many potential causes.

Clubroot
—Above-ground symptoms, including wilting and pre-mature ripening, should be evident in severely-infected plants. Even if you don’t see above ground symptoms, pull plants and look for galls. Plants with small galls will not show above ground symptoms, but light or severe infection both have essentially the same risk for spreading the disease with equipment.  If galls are present, the best management at this stage is to prevent spread within the field, and certainly from field to field. Harvest those fields last to prevent field to field spread. Consider no-tillage in those fields to minimize spread throughout the field and from field to field by the tillage tool. Click here for more on clubroot. Inspect other weeds that can host clubroot as well, especially in non-canola crops. The most common clubroot-susceptible weed species of the Prairies are wild mustard, stinkweed (a.k.a. French weed or pennycress), flixweed (a.k.a. tansy mustard) and shepherd’s purse.
Canola Encyclopedia chapter on clubroot

Foot rot and brown girdling root rot
—Canola plants pinched off at ground level likely have rhizoctonia foot rot. Another possibility is brown girdling root rot (BGRR), a similar infection caused by the complex of rhizoctonia, pythium and fusarium, producing a characteristic brown root. Growers have no management options for this season, but if they’re seeing high rates of disease, note that these diseases can be much higher in tight canola rotations.
Canola Encyclopedia section on root rot

Verticillium wilt
—The interference with the uptake of water and nutrients caused by Verticillium wilt can cause the crop to show signs of stunting and premature senescence. When individual plants are closely observed, faint black (vertical) striping can be seen on the stems which, when rubbed can appear darker and more obvious. By peeling back the epidermis and outer cortex of the stem, blackening can be seen on the inside of the stem, and eventually microsclerotia, later in the growing season. The striping will almost become more obvious deeper into the maturation process due to the tissues dying below the stem surface.
—At the end of ripening, the microsclerotia will begin to germinate and produce conidia spores externally, giving the outside of the stems a powdery look.

Grey stem
—Grey stem can be confused with blackleg, especially later in the season as lesions take over whole stems. With grey stem, grey silvery to purplish patches develop on stem. These later spread to whole stems and continue to spread in stubble as plant decomposes. Grey stem usually infects too late to cause significant yield loss.
—Later in the season, blackleg lesions become less defined, with white or grey colour that starts to look a bit like grey stem. To differentiate the two at the end of the season, cut the lower stem and look for necrotic tissue in the crown — a characteristic of blackleg. Blackleg lesions are rarely high on the stem unless there was physical damage. It migrates to the crown. Grey stem on the other hand tends to be anywhere on stem.

Pre-harvest scouting: 8 diseases
Check patches of pre-mature ripened canola before or during swathing to identify the cause. Use the Canola Diagnostic Tool at www.canoladiagnostictool.ca to help with the assessment. It could be blackleg, clubroot, sclerotinia stem rot or something else entirely. Growers can use this scouting information to plan rotations, choose varieties, and update fungicide decision-making for next…
Pre-harvest disease scouting: 8 diseases to look for
Diseases are usually easiest to see and diagnose in the couple of weeks before swath timing. Patches of dying or prematurely-ripening plants are obvious areas to scout (and show up really well with drone images), but even clean-looking fields can provide some early warning if you take time to look. Gather up your scouting toolkit…
Post-harvest scouting for verticillium and other diseases
Disease scouting long after swathing is not usually the most accurate, as saprophytic organisms — those that feed on and break down dead material — move in fast and cloud the identification process. Verticillium is one disease that can be more obvious and easier to identify after cutting a canola crop. As the plant dies,…
Assess canola diseases before harvest
Latest News
August 9, 2013 The week or two before swathing or during swathing are the best times to survey the disease situation in your canola fields. Large lesions — the ones that will lead to yield loss — are easiest to spot at this stage and when plants are still standing. And clubroot galls, if present,…