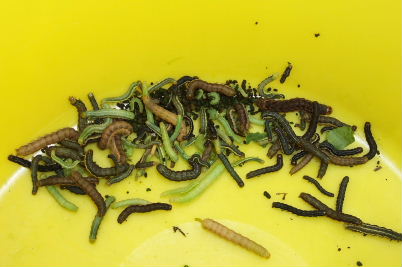 Scouting for bertha armyworm can be tricky when scouting during the heat of the day. Click here to view a short scouting video with Canola Council Agronomist Tiffany Martinka. It can also be difficult to scout in a heavy crop but try these scouting tips: pull canola plants in a given area (ie. 1 meter squared) and sprinkle the ground in the cleared area with a light-coloured powder (ie. flour or corn meal). Then vigorously shake the plants over the powder and the dark-coloured larva should be easier to see. Or shake the plants into a plastic container to capture the larva. This is preferable to trying to carry the plants out of the field, as bertha larvae are easily dislodged from the plants and left behind, making your counts inaccurate. Remember to scout for larva that might also be hiding under leaf litter and soil clods.

Scouting for lygus bug with a sweep net can be variable due to time of day, wind conditions, stage of plant, etc. Hector Carcamo, AAFC Insect Researcher, suggests that during flowering approximately 10% of lygus bugs present are found with sweep net scouting and about 7% later on when the pods begin to thicken. But economic thresholds take into account this variability. So Carcamo recommends an economic threshold of 1 to 1.1 lygus per sweep during flowering to early-pod and 1.5 to 2.0 lygus per sweep later (10 to 14 days before cutting). The reason for the higher number later is lygus move up the plants to feed but the majority of yield tends to be in the bottom half of the plant canopy. Remember no insecticides are registered to be applied within one week of cutting (PHI < 7 days).

Lygus feeding damage is difficult to visually see on the plants. Small pokes with bruising (like that from a needle prick) can sometimes be seen on the pods especially the undersides. Sticky sap may be noticeable as you try to walk through or sweep. Small, shrunken seeds may be found if pods are opened up.

There is no substitute for thoroughly scouting for lygus bug.

Click here to review last week’s information on lygus bug including: stages to count, how to scout, economic thresholds, etc.

Late-season insects and pre-harvest intervals
We had reports this week of bertha armyworm at higher numbers (maybe not at thresholds) in some very localized areas, lygus (it’s getting late), flea beetles (don’t spray them, it won’t help for next spring) and aphids (probably don’t spray them either). While doing a pre-harvest scouting for disease, take a look at the insect…
Quantify late-season insect threats
In parts of central Alberta, lygus counts continue to exceed thresholds significantly (with counts as high as 450 lygus in 10 sweeps in some fields). In other areas, lygus numbers are just at or approaching threshold but the crop is very near to swathing. With these counts, growers are encouraged to resist the urge to…
Three insects to look for on canola pods
The three most common pod munchers are bertha armyworm, diamondback moth larvae and lygus bugs. Hot spots can sometimes be isolated to specific fields, so check each field. Before spraying, make sure insects counts are at or above economic thresholds. Applications made when insect numbers are below thresholds will not provide a positive return on…
Top 10 things to consider when scouting for insects
10. Scout regularly. Go out at least once a week. If you see elevated numbers, visit the field more frequently. 9. Choose an appropriate time of day. Lygus, for example, are most active on warm, calm days between 10 a.m. and 4 p.m. However, morning or evening tend to be the more active times for…