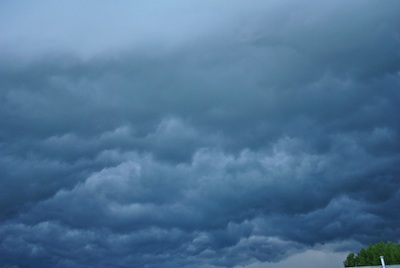 Applications made when cool cloudy days follow cool nights will result in lower herbicide efficacy than applications made in warm sunny days. Cloudy days don’t provide the photosynthetic activity required for many herbicides, including Group 10 glufosinate. And nights near freezing followed by days with highs that barely reach 10 C will not provide high metabolic activity required for best results from Group 9 glyphosate.

Herbicides in general tend to work best in warm sunny conditions when weeds are actively growing and cycling nutrients into their growing points. In these conditions, weeds will take in herbicides most efficiently.

Talk to your local product rep to see how they will support the use of their product when applied in cool temperatures. Set expectations according to weather conditions.

What would 0 C mornings and 10 C highs with cloud and rain do for herbicide efficacy?

In this case, herbicide activity on that cloudy cool day would be next to zero. Biological activity would have stopped during the night, and would not start up again until the plant warmed to at least 5 C — and even then it would be very slow. A few hours between 5 C and a daytime peak of 10 C would not be enough warmth to get plant metabolism going to a point where herbicide was all that effective, especially with the cloud. No biological activity = no herbicide activity. Ideally, you want a day or two of warm sunny days and night time lows of 4 C or higher before spraying. If applied more than 48 hour before the event, efficacy on living plants will be improved and the plant will continue to decline when it warms up again.

Are there any herbicides that work well in these conditions?

Group 4 herbicides — such as clopyralid (in Lontrel) — tend to be less impacted by cool weather because they are somewhat plant persistent (are not quickly deactivated) in susceptible species and will remain active in the plant after the weather turns again. In addition they are less associated with a particular site of action in the plant because they are mimicking the plant’s natural growth regulators.

Soil residual herbicides in any group have a certain performance edge under adverse weather over their non-persistent counterparts. The soil residue re-exposes the plant to the herbicide when conditions improve and the weed control takes place then. Beware of the potential for injury in these cases since the cold has shut down the tolerant plant’s mechanism for ridding itself of the herbicide but the soil residue still allows the herbicide to build up in the plant as the uptake from the roots continues as long as the plant continues to respire.

Some non Group 4 herbicides like Amitrol 240 are also plant persistent and as a result will pick up where it left off when it got cold — if the target was treated ahead of the cold weather. Keep in mind though that treating during cold weather can also slow the movement of the herbicide from the leaf surface into the plant and leave it vulnerable to wash off or other degradation.

Would lower efficacy of an EARLY spray be better than waiting a week for better conditions if it means the weeds are that much bigger?

Growers should not get in a panic to spray on cold and grey days. Calendars are human inventions and plants don’t look at them.  If it is cold, the “time” from a plant growth perspective has slowed to a snail’s pace or stopped. It will resume when temperatures warm up again. The point is under cool/cold temperatures and cloudy rainy conditions the plants will not continue to get bigger.

Think of a plant (or any living thing for that matter) as a series of ongoing chemical reactions that build and maintain the organism.  Most of these chemical reactions are facilitated by enzymes which are simply bio-catalysts. These biocatalysts are typically the target of the herbicide in the plant.

Most bio-chemical reactions effectively stop at around 4 C, and as a result so does biological activity. Because the speed of any one reaction is going to fall along a continuum between zero and optimum, temperatures just above 4 degrees are not likely to amount to much growth either.

Most herbicides interfere with a specific chemical reaction within the plant by basically competing for the reaction site with one of the building blocks of that reaction. When the plant is cool and the reactions are not ongoing, one or more of the constituents of the reaction are likely sitting in the enzyme site of action and the herbicide molecules are not able to get into that site. They are left exposed to be bound up or otherwise deactivated before they are able to gain access to the site.

When temperatures start to improve, there can often be a lag period for growth to resume while the plant gets everything organized again. It can take up to 48 hours for the plant to get back to functioning normally. In that time the herbicide is exposed to those things that attack herbicides within the plant. The longer the plant remains in the “non-growing” or “minimal activity” condition the less effective any herbicide is going to be as a result. Part of this is linked to persistence of the herbicide in the plant and/or the medium the plant is growing in at the time. For example, for those herbicides that are bound strongly by organic matter in the soil (glyphosate, bromoxynil), the organic matter in the plant (cellulose, lignin) will do much the same thing.

As an example; glyphosate is bound very quickly within plants (24 to 48 hours) and as we know immediately to soil, so it is a race from the time of application to the time that all of the glyphosate is bound or metabolized by the target plant. When the light is low and temperatures are cold, the plant is not actively moving sugars produced in the leaves to the rest of the plant. If sugars are not moving, glyphosate does not move out of the leaves either and you end up with a situation where the leaves die and the rest of the plant is fine. We saw this situation bear out in the spring of 2004 when night temperatures went down to -9 C and daytime highs were only 4 or 5 C. As a result many of the weeds sprayed during that period recovered and were growing as if nothing ever happened within a week or two.