Home / Canola Watch / The reseed question. How many plants are enough? 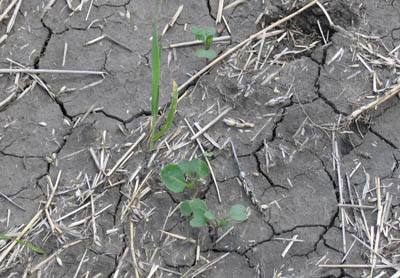 Growers face a tough decision whenever a large percentage of their stand is lost to frost damage or wind or any other factor — will it pay to reseed?

Research and grower experience over the years have shown that uniform stands of 1-2 plants per square foot will often outyield or match the yield of a reseeded crop with a much denser stand. Weed control is a key factor in getting the most out of a thin stand. And given that yield potential is similar, the original crop will likely pencil out as more profitable because it doesn’t include reseeding costs.

Reseeding can make sense if plants stands are lower than 1-2 per square foot and if the stand is not uniform (patchy). If part of a field is OK and the rest is marginal, growers may choose to reseed only the marginal area. A crop reseeded in May can catch up somewhat to an early seeded crop — maturity may be only a week to 10 days later than a crop seeded three weeks earlier

If a grower decides to reseed, the best management decision would be to spray out the old crop and start fresh. Overseeding into the old stand will give 2 distinct stages of crop, creating difficulties for disease management and harvest staging. One option to remove the old crop would be to switch to a different system and spray out volunteers/old crop that way.

When reseeding patches, consider using an earlier-maturing variety so patches mature at as close to the same time as first-seeded plants throughout the rest of the field as possible.

Should I reseed wind-damaged canola?
High winds can blow seeds and seedlings right out of the ground, especially if topsoil is dry. Wind can blast the growing point off emerged seedlings, causing death. Wind can also blow topsoil off knolls, taking seed with it. This moving soil can also bury other seedlings. In short, wind alone can create a need…
Wind blows out seeds and plants
After a windy week across most of the Prairies, top soil is dry and some canola seed and seedlings have been blown out of the ground. If the field is not seeded: Growers still want to seed shallow, but may want to move closer to 1” deep if wind at seeding is likely to blow…
Reseeding: The May option
When growers have canola stands of fewer than 4 plants per square foot — due to low seeding rates, poor seed survival, insects, crusting, frost, wind, etc. — they grapple with the question whether to reseed. An established canola stand with as few as 1-2 plants per square foot generally has higher economic potential than…
Reseeding and dry conditions
Wind losses, intense flea beetle feeding and slow emergence – each made worse by dry conditions – have some farmers wondering about reseeding. Keeping a thin stand is often the better option, but this article will help with the decision. Let’s deal with the third reason first: If dry conditions have slowed emergence, stranding seed…