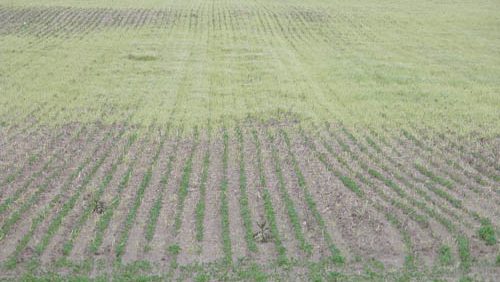 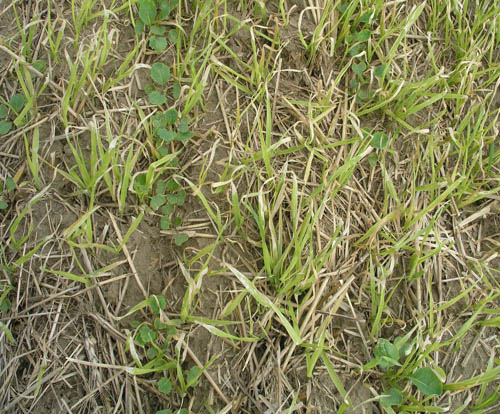 Seeding is a priority for many growers this week, but fields with a large population of weeds, especially advancing winter annuals, should get a pre-seed burnoff. For annuals and winter annuals, glyphosate needs only 24 hours to get to the growing point and set the control process in motion. (It may be quicker than that for some specialty glyphosates in good growing conditions.) After a day, the crop can be seeded. For perennial weeds, the recommended delay ranges from 3 to 5 days depending on weather conditions. If sunny and warm, translocation will take place fairly quickly so 3 days should be enough. If weather is cloudy and/or cool when applied, 5 days is recommended before seeding. When deciding how long to wait to seed, remember that the conditions on the day the glyphosate is applied are the most important to efficacy, making them relatively more important than conditions in the days that follow.

In weedy fields, the economic return will likely be higher for a pre-seed burnoff than if the grower seeded over these weeds and then took a chance on getting them sprayed before crop emergence or in-crop.

In addition, weeds present when the crop emerges will have a substantially greater negative impact on the yield of the crop if the pre-emergent application is missed altogether.

University of Saskatchewan research shows that where weed competition is significant the weed control provided by an early burnoff application can have a greater influence on crop yield than seeding date. The study looked at seeding dates in early May vs. late May with burnoff treatments applied the day previous to seeding. The third treatment was a burnoff conducted with the early seeding date but not seeded until the late seeding date. The late burnoff treatment yielded significantly lower than either of the early spraying treatments, regardless of when they were eventually seeded. The study was done on wheat, but lead researcher Ken Sapsford says results would be similar for canola. One of the benefits of early weed control is that it stops weeds from taking up moisture and nutrients. Those nutrients will be returned to the soil eventually after the weeds decompose, but not in time to be useful to this year’s crop.

Post-seeding/pre-emergence spray window. The cleaner you have the field as canola emerges from the ground, the better. One option if growers miss the pre-seed burnoff, is to apply glyphosate post seeding and pre-emergence. But since shallow seeded canola can emerge within 5 days under warm and generally moist soil conditions, and since growers need to leave weeds for a couple days to start growing again after the seeding operation, the window for post-seed/pre-emergence spraying is very narrow. With all the wind these days, that opportunity may never come. (The time lag between seeding and spraying is necessary to allow weeds buried by the seeding operation to re-emerge and to allow weeds uprooted to overcome the stress placed on them.)

In crop sprays and glyphosate resistance. A 2010 predictive model by Hugh Beckie, research scientist with AAFC in Saskatoon, ranked kochia first among weeds at risk of developing glyphosate resistance on the Prairies. The prediction was accurate. The next most likely weeds to develop resistance, in order, are wild oats, green foxtail and cleavers. While these weeds are unlikely to develop glyphosate resistance when glyphosate is applied in crop only one year in four, tight rotations of Roundup Ready canola or seasonal pre-seed applications timed to target these weeds increase that risk substantially. Read the article on page 11 of the March 2011 Canola Digest.

Spray big weeds before seeding
Seeding is the priority for many growers this week, but fields with lots of big weeds should get a pre-seed burnoff with a high rate of glyphosate before seeding. The herbicide needs only a day or two to get down into the growing point of these large weeds, then the grower can resume seeding. The…
Spray weeds now, even if seeding is delayed
Early weed control is best, especially for perennials and winter annuals. Glyphosate rates will need to be increased for established weeds, even if they’re small. CleanStart, the only product registered to control volunteer Roundup Ready canola ahead of canola, works best when weeds and volunteers are small. Even if growers don’t expect to seed for…
Seed first or spray weeds? A situation
A farmer is seeding Roundup Ready canola and the field has a lot of winter wheat volunteers and some perennials. Is the farmer better to seed or spray first? Answer: In this situation, with Roundup Ready canola being able to take a glyphosate application at any time up to the 6-leaf stage, the farmer may…
The post-seeding, pre-emergence spray option
Applying a burnoff after seeding but before emergence is a risky option for those who want to get seeding. Consider the following risks with this practice: If the weather doesn’t cooperate and the burnoff doesn’t get done before the crop emerges, the crop is in a significant yield loss situation. In-crop weed control needs to…