If you’ve budgeted for hybrid seed and optimal herbicide, insecticide and fertilizer applications, and you’d like to spend a little extra to push yields, consider a higher nitrogen rate. This is the key message from a recent study by Neil Harker and 17 other scientists from across the Prairies. The work was just published in the Canadian Journal of Plant Science under the title, “High-yield no-till canola production on the Canadian prairies.”

The study compared canola yields for two seeding rates (75 vs. 150 seeds m2) and two nitrogen rates (100% vs. 150% of soil test recommendation) in plots at 8 sites across the Prairies in 2008 and 2010. At each site, wheat was seeded in 2009 between the two canola treatments. Herbicides, insecticides and fertilizers other than nitrogen were applied as required for optimal canola production. (Yield results in the study were reported in tonnes per hectare. See the table at the bottomfor conversion to bushels per acre.)

—Nitrogen source: The study also compared 100% urea versus a blend of 50% urea with 50% polymer-coated nitrogen. In 2008, the coated nitrogen did not provide a yield benefit. In 2010, the nitrogen source with 50% polymer coated increased average yield to 3.29 t/ha, up from 3.19 for treatments with 100% urea. All fertilizer was side-banded during planting, 2 cm beside and 3-4 cm below the seed row.

—Fungicide: The study compared treatments with and without fungicide applied at the timing for sclerotinia management. In 2008, fungicide provided no yield benefit. In 2010, fungicide treated plots had an average yield of 3.24 t/ha compared to 3.14 for plots without.

—Rotation: The study included a few extra trials with canola seeded in 2009 instead of wheat (canola-canola-canola versus canola-wheat-canola.) In 2010, the high-input canola following wheat yielded substantially more (3.50 t/ha) than the same high-input treatment on canola stubble (3.22 t/ha).

Individual sites were influenced by site conditions such as soil organic matter, days to maturity, and temperature, but these site and environmental predictors did not alter treatment rankings. Using higher than the soil test recommended rate of nitrogen or planting 150 versus 75 seeds m2 increased canola yields consistently across western Canada.  This study did not analyze the economic return of any treatments. 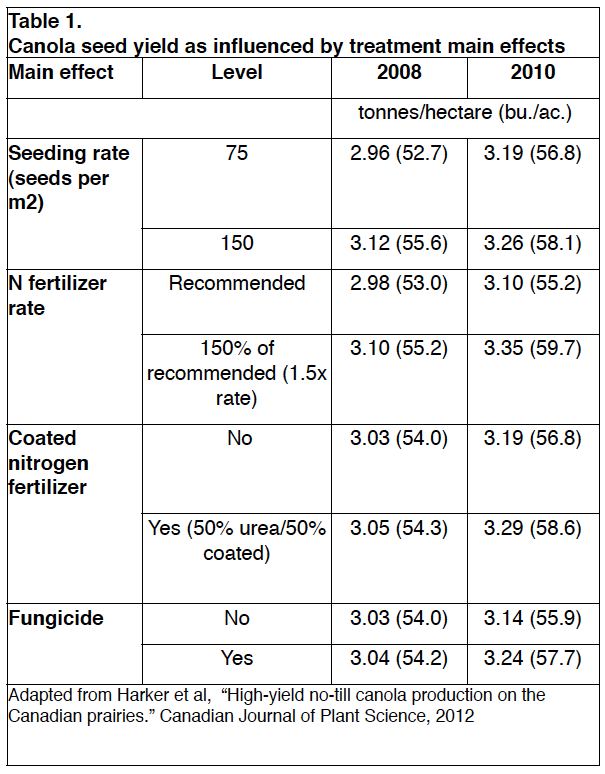 Make the most of your fertilizer investment
The 4 Rs, as described by the Canadian Fertilizer Institute and other crop nutrition organizations, are the right fertilizer source at the right rate, at the right time and in the right place. The 4 Rs will help you make the most of your fertilizer investment. Here are the three basics of canola crop nutrition:…
Extra inputs: Increase N rate or go with seed-applied nutrient product?
Think critically when it comes to input investments. Canola plants, like any other plant, need many different nutrients and rely on naturally-occurring hormones to grow and produce a good yield. Limitation on any of these may reduce yield potential. But, in most cases when it comes to crop nutrition, the biggest return on investment comes…
Safe rates of seed-placed nitrogen
Putting down seed and all fertilizer in one pass is common practice on the Prairies. An effective method is to place some phosphate either with the seed or in a sideband in close proximity to the seed row, while placing the balance of the phosphate and the more mobile nitrogen and sulphur in a band…
Top up nitrogen before 5-leaf stage
Growers may have good reasons for a post emergence top up of nitrogen this year. For example, maybe they couldn’t get the supply they wanted at seeding time. Or maybe they cut back rates at seeding because of wet soil conditions with a plan to top up later if conditions improve and a good stand…