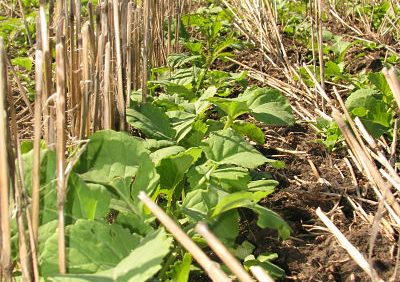 Growers have made great strides in advancing no tillage and conservation tillage practices. General benefits include reduced fuel use, reduced soil erosion, higher soil moisture reserves (which are welcome most years), and a general increase in profitability. Any return to tillage, even if only one field or across the whole farm for only one year, should be weighed carefully. Growers may consider tillage for:

Residue management. Tillage is often used to correct uneven residue distribution during harvest. Uneven residue can be a problem for proper stand establishment the following spring. But growers who find they have to till soil to manage residue may need to consider more sustainable long-term steps to improve their combine’s spreading capacity. An after market chaff spreader may help. Straw chopper performance can be improved with sharp blades and tight belts to ensure maximum power transfer to the unit.

Heavy harrowing on a hot, dry day may help spread residue without full tillage, but heavy harrows don’t always do a great job of spreading chaff strips, and they often rip out standing stubble, which is actually the best kind of crop residue. Standing stubble holds the snow, prevents soil erosion and is off the soil surface and out of the way for drill openers. Chopping down all the standing stubble just adds to the matt of residue on the soil surface. For long-term residue management solution, consider cutting crops higher and improving the combine’s chaff spreader and straw chopper, particularly if a move to wider header widths in recent years has increased the density of those chaff and straw rows.

Extreme moisture. Zero tillage tends to preserve moisture, so if fields are excessively wet, tillage is seen as one way to dry out the top layer. But the way the Prairies can switch from wet to dry from one year to the next, anticipating next year’s moisture is difficult. Tilled fields will warm up faster next spring, but that may not be much help for emergence of small, shallow seeded canola seeds if the tillage also leads to dry surface soil, which is a possibility after the dry fall.

Disease management. If you think tillage is going to help control canola diseases, think again. Tillage accelerates the distribution of clubroot resting spores throughout a field once the disease is established. More tillage also creates additional opportunities for equipment to carry soil infested with clubroot spores to neighbouring fields, and can facilitate spread of infested soil through increased soil erosion. For blackleg, it was thought that tillage may reduce the disease by burying canola residue, but a recent study found this not to be the case. The study by Agriculture and Agri-Food Canada in Melfort, Saskatchewan, found there was no difference between tilled and untilled treatments in causing blackleg infection in canola the following year. For more information on best management practices for controlling blackleg, check out this article on the Prairie Soils and Crops website.

Deep ruts. Tillage can help to smooth deep ruts, which some fields may have after a couple of wet summers. In this case, tillage may be the best solution to correct the problem quickly, but severe ruts may require several passes, so consider the economic cost. If the ruts are not severe, the winter freeze-thaw cycle will provide some benefit, as will the retained moisture from snow in the stubble.

Weed control. Tilling this late in the fall to control weeds is only going to spread perennial roots around, not control the plants. A pre-seed burnoff at high rates next spring will be more effective to control these large perennial and winter annual weeds ahead of canola than tillage would be at this point of the season. Long-time direct seeders who decide to till may also experience:
—An intense flush of weeds from buried dormant seeds that can germinate when moved closer to the surface, or incorporation of seeds that were stranded in surface residue.
—Preservation of newly produced seeds as a result of seed dormancy due to burial of the seed. This deep seed bank could remain preserved for many years until disturbed again.
—Temporary loss of the community of predatory insects and small mammals that feed on weed seeds and other pests. This may allow weed seed banks to build up again until this community is returned.
Consider targeting tillage to those areas that are worst affected and leave as much long-term direct seeding intact to retain these benefits.

If fields are at full moisture recharge and you have to till, do it in the fall. Even though you lose the stubble to catch snow when tilling in the fall, spring tillage ahead of seeding canola will often result in a poor seed bed, resulting from large clods that limit seed to soil contact and drying out the top inch or two of soil. If fields are dry, avoid fall tillage and wait until spring to reassess the moisture situation.

Tillage for weed control
Tillage may not be a best practice in dry regions this fall. Dry soils will be difficult to penetrate, and tillage will destroy standing stubble and its snow-catching capability. We can’t predict winter weather, but this extra moisture may be valuable next spring. Growers who decide to till may also experience: —A heavy flush of…
What do I do about ruts?
Swathing or combining in soft soil conditions will leave ruts. Some fields will also have ruts from spraying fungicide at flowering. We know that tillage will spread clubroot as well as weed seeds and verticillium, but ruts can create headaches for combining, fall spraying and seeding next spring. Working wet fields can also cause compaction.…
Top 10 reasons to think reduced tillage
Growers cultivating, discing and harrowing fields this spring may ask themselves “Why?” (This is a good test question for any practice.) Are the reasons still valid for current conditions? Is there a better alternative? Here are 10 things to keep in mind when facing the decision to till or not: 1. Clubroot spreads with the…
Consider tillage wisely
Western Canada has made great strides in adopting minimum tillage practices that save time and diesel fuel, improve soils and improve sustainability scores. Here are factors to consider before choosing tillage: Clubroot. This serious canola disease spreads primarily with the movement of soil. Tillage speeds up the movement of clubroot spores throughout a field and…