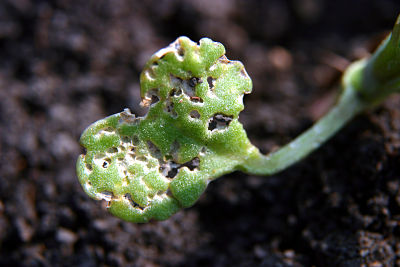 Cutworms. Spraying has been required in pockets all across the Prairies, particularly for redbacked cutworms in the Peace region, central Alberta around Vermilion and Vegreville, and west central Saskatchewan. Click here for scouting and management tips.

The Prairie Pest Monitoring Network report says dingy, bristly and glassy cutworms plus sod webworms have been retrieved from timothy, creeping red fescue and select canola fields this spring in the south Peace River region. Click here for a link to the Prairie Pest Monitoring Network’s newly posted Cutworm Larval Collecting Protocol. (After clicking, scroll to the bottom of the website page then click on “Cutworm” to open).

Flea beetles. With many early seeded canola crops taking a month or more to get established, protection from insecticide seed treatments may be declining. Later seeded canola crops should still have protection from flea beetle feeding but should also be regularly monitored. Scout for flea beetle damage and prepare to take action if damage reaches 25% defoliation (as shown in the photo) in patches or across the field.

Some growers have already sprayed. Pay careful attention to flea beetle feeding in fields thinned due to frost or other factors. Sprays should only be used when necessary, but when evaluating the threat, consider lower thresholds when canola stands are thin and advancing slowly. The economic control threshold may be lower than 25% defoliation when there are fewer than 4-5 plants per square foot, if flea beetles are still actively feeding in significant numbers.  Click here for images of 10% to 90% defoliation.

Grasshoppers. This is the No.1 issue in the Peace River region this week. Migratory and two-striped grasshoppers have reached threshold numbers in wheat fields and have caused damage along the edges of some canola fields.

The Prairie Pest Monitoring Network report for this week says egg development has been greatest in Alberta so far, particularly in the Fort Vermilion area. The maps below show that the egg hatch has only just begun. Click the following provincial links for help with grasshopper monitoring: Alberta Saskatchewan Manitoba 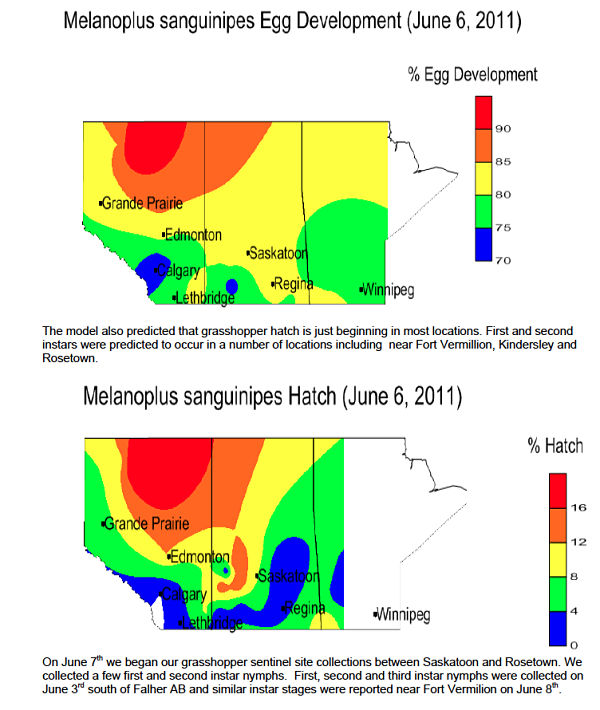 Wireworms. These are the biggest insect threat this week in west central Saskatchewan. While insecticides are not available to control wireworms in canola, it helps to identify whether wireworms are indeed the cause. Cutworms cause similar damage and cutworms can be controlled with insecticide. Other insects such as crane fly larvae, Therevid larvae (stiletto fly), and others may be found in canola fields but would not be damaging the crop. Click here for information about wireworms versus cutworms.

Diamondback moths. Traps in southern Alberta and Manitoba are catching higher numbers with every passing week. In Saskatchewan, diamondback moths were picked up in low numbers in traps this week near Swift Current and late last week at locations near Rosetown (west central), Regina and Avonlea (south central). Growers will have to pay attention to larvae numbers when more hatch and we get additional generations later in the summer.

Insecticide/herbicide tank mixes: Some growers are looking at insecticide and herbicide tank mixes to save on application costs. This is allowed under PMRA rules as long as both products are registered for the intended use, but some products may be antagonistic or incompatible with each other. Check with your retailer before trying a tank mix for the first time.

Sprays should only be used when necessary, but when evaluating the threat, consider lower thresholds when canola stands are thin and advancing slowly.

Insect update
Flea beetle spraying picked up again this week, as more canola fields reached thresholds. Don’t give up on flea beetle scouting just yet. Click here for more on the flea beetle spray decision. Cutworm feeding has been detected in some fields, but spraying is still minimal at this time. Digging will be required to distinguish…
Insect update: Flea beetle scouting, cutworm vs wireworm, DBM monitoring
Flea beetle scouting. Most fields will not require a foliar insecticide for flea beetles in addition to seed treatment, but you want to check to make sure. Begin monitoring right after emergence and through until at least the four-leaf stage. Seed treatment can be effective through most of this period, but slow-starting or slow-growing crops…
Insect update
Take a few extra minutes each day to scout emerged crop for insect damage. Rain delays provide time to give each field a close inspection. Flea beetles High levels of flea beetles have been observed in the Peace River region, but right now they’re feeding on volunteer canola because not a lot of crop has…
Insect update: Diamondback moths early, striped flea beetles
Diamondback moth numbers high, early Adult diamondback moth numbers are higher than usual in the southern Prairie for this time of year. Diamondback moth larvae are not a threat to canola until later in the season, and a lot can happen between now and then. Rain can drown young larvae and natural parasitoids can feed…