Putting down seed and all fertilizer in one pass is common practice on the Prairies. An effective method is to place some phosphate either with the seed or in a sideband in close proximity to the seed row, while placing the balance of the phosphate and the more mobile nitrogen and sulphur in a band further from the seed. Not all growers are set up with drills that can do this, so growers have to find some compromise between equipment cost, timeliness of the seeding operation, and seed safety.

Canola is more sensitive to seed-placed fertilizer than other larger seeded crops. Salts in nitrogen, sulphur and potassium fertilizers can desiccate canola seed. Ammonia toxicity from nitrogen in fertilizer also damages canola seedlings. Placing high rates of these fertilizers in the seed row often leads to serious damage or death for canola seeds or seedlings.

Nitrogen presents the greatest risk for two reasons: (1) It can damage canola two ways — through ammonia toxicity and through the salt effect. (2) Application rates are much higher for nitrogen than for other nutrients.

Factors that influence safe rates of seed-placed nitrogen for canola

As noted, the guidelines in Table 1 are based on good to excellent soil moisture. Moisture is near or at field capacity. When soil moisture conditions are dryer than normal, seed placed nitrogen rates should be lowered.

As shown in Table 1, Manitoba has lower safe rates than Saskatchewan and Alberta. This distinction is based on soil characteristics. Manitoba soils tend to have higher soil pH, and higher levels of free lime or carbonates. Under these conditions, urea tends to release more of its nitrogen in the free ammonia form (NH3), which is more damaging than the ammonium form (NH4).

Also, canola seeded into lighter soils is at higher risk of damage from seed-placed nitrogen. Light sandy soils can’t hold as much ammonium as heavy clay-based soils can, so the rate of conversion to the more damaging free ammonia form is faster in light soils. 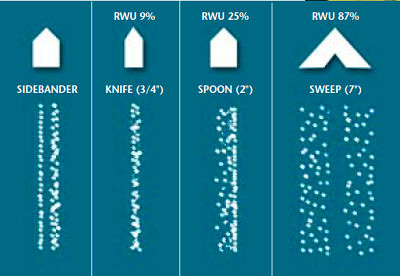 Seed row spacing is the distance between the centre of one seed row and the centre of adjacent rows. Seed row width is how wide seed is scattered in each row.

Row width utilization (RWU) is based on both of these measurements. RWU is the ratio of seed row width to row spacing. For example, a 3” scatter width — also called “spread” — on a 9” row spacing gives a 33% RWU.

The Canola Council of Canada as part of the Canola Production Centre program ran a field-scale study to compare stand establishment for three RWU treatments at three different nitrogen rates — 35, 70 and 105 pounds of actual nitrogen per acre. Row spacing was 8”.

The spread patterns were:

The study also included a sideband treatment with fertilizer placed 1″ below and beside the seed. All combinations were measured against a check treatment where 70 pounds actual N per acre was broadcast.

Canola emergence was lower for all four treatments when compared to the broadcast check. This was true even at the low 35-pound rate of nitrogen, which explains why the safe rates on the provincial recommendations tend to be lower than that. The mortality rate increased with higher nitrogen, which is to be expected.

But the study also measured final yield, and differences in emergence rates often disappeared by harvest. Time and again canola has shown itself to be a crop where early season damage appears to be overcome by compensating growth. These trials were no different. Final season yields did not fall as dramatically as the early season injury might have indicated. In the case of the knife opener, even though the stand was thinned by 50% at the 70 lb./ac. nitrogen rate, the average yield for the study was slightly higher than the broadcast check — which had the same nitrogen rate.

But what this doesn’t measure is the increase in risk. The study found that higher nitrogen rates in combination with narrower openers led to decreased emergence, increased weed pressure, and increased days to maturity. This led to reduced quality (higher green seed and lower oil content). Higher seed germination and higher seedling emergence also improve the return from canola seed, which can represent an investment of up to $10 or more per pound.

For canola, the risk of damage from seed-placed nitrogen is similar for both ammonium nitrate (34-0-0) and urea (46-0-0). Anhydrous ammonia (NH3) is the most damaging form, which is why anhydrous ammonia should never be placed in the seed row. Polymer coating or urease inhibitors slow the release of ammonia and ammonium from urea, which can allow for higher safe-rates of seed-placed urea. These products work in different ways to achieve the result.

Polymer coating (ESN): ESN wraps urea prills in polymer that lets water in slowly, and then slowly releases ammonia and ammonium back out into the soil. This keeps the concentration of ammonia and ammonium lower early in the season when seedlings are most sensitive. Based on company data and independent research, safe seed-placed rates of ESN are 3 times higher than provincial recommendations for straight urea.

Urease inhibitors (Agrotain): The urease inhibitor in Agrotain slows the conversion of urea into ammonia and ammonium, reducing concentrations early in the season. The company’s product factsheet says Agrotain allows for safe seed placement of nitrogen at rates 50% higher than provincial recommendations for seed-placed nitrogen.