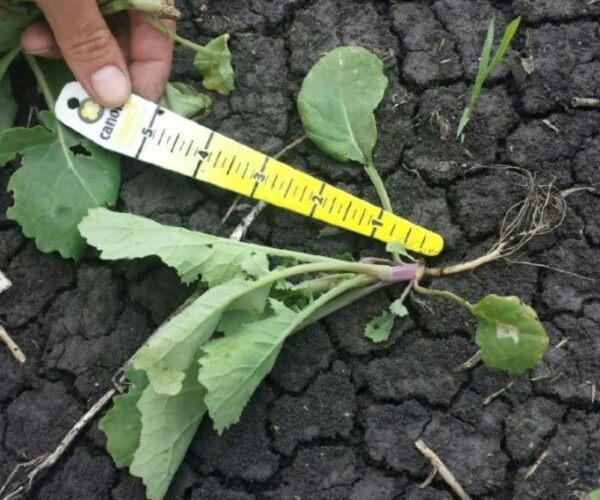 Canola is vulnerable to a number of seed and seedling diseases, including those caused by Rhizoctonia solani, Fusarium species and Pythium species (see ‘Comparison of root rot pathogens’ graphic below). These can impact plant survival and subsequent plant and establishment and populations. In addition to effective scouting at the right time, research has been done on the soil pathogen populations and preventative or operational practices to better manage these diseases.

Soil samples were collected for pathogen inoculum sources from field plots with various crop rotation histories, at Scott and Melfort, SK after the cropping season in 2006 and from Scott, SK, in 2007. This inoculum was then used in the field experiments, which were four replicated split-plots with seven rotations as treatments (Table 1), with all phases of each rotation present every year. Fungicides were applied to sub-plots and 21 composite soil samples were collected from the seven crop rotations.

Results and conclusions from this study include:

Therefore, these management options are recommended:

To learn more about this project, see this summary or review the final report.

The specific objectives were to:

The research team carried out two field surveys and conducted both greenhouse and small plot field trials between 2007 and 2010 to address these objectives. This allowed for the identification and incidence of pathogens in canola crops and tested the impact of management practices on seedling diseases, which ultimately impacts canola plant stands and subsequent yield.

Learn more details about this project in the summary, the final report and the resulting publication: The effect of seed size, seed treatment, seeding date and depth on Rhizoctonia seedling blight of canola.