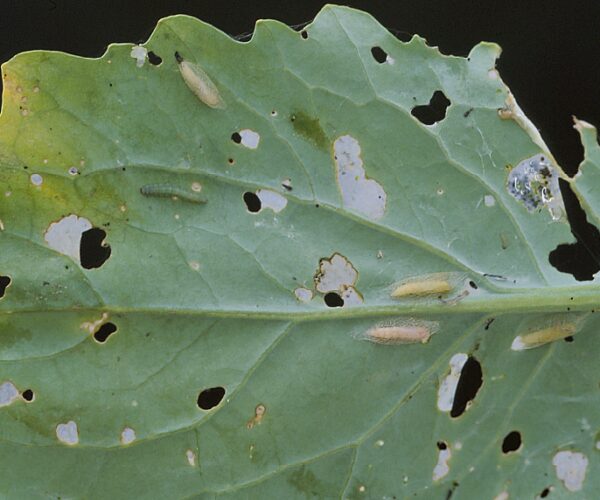 In the quest to maximize canola yields, insect scouting is a vital component. Diamondback moth (DBM) impacts can vary in severity between years and regions, but outbreak years can cause significant impacts to canola fields. The reproductive potential, multi-generational nature and capacity to develop resistance to chemical management options of this insect complicate its management. So ensuring accurate thresholds is critical to management. Investigating existing DBM knowledge gaps (such as feeding behaviours) which could also uncover additional management strategies that would support long-term success of managing this insect.

The Prairie Insect Pest Monitoring Network (PPMN) report wind trajectory maps which help predict the timing of the DBM arrival to the Prairies. They also use field surveys and pheromone catch traps to help indicate peak moth influx and provide information on when to monitor DBM larval populations.

The role of natural enemies in DBM suppression in canola

The ‘Identification and assessment of the role of natural enemies in pest suppression in canola with specific reference to diamondback moth (DBM) management‘, led by Dr. Maya Evenden investigated how natural enemies can be fitted into dynamic DBM thresholds. A multipronged approach was used to estimate effects of larval densities on canola yield while also quantifying the contributions of natural enemies in the biological control.

To accomplish this, the research team surveyed natural enemies (including predators and parasitoids) associated with DBM in canola in Alberta. They also examined the impact of crop growth, background vegetation and abiotic factors (temperature, precipitation, relative humidity) on DBM.

Throughout the 3-year study, DBM activity was very low in Alberta. The extreme weather conditions, including severe drought in 2018 and heavy rainfall in 2019 and 2020, may have affected the DBM influx and colonization, surveys were conducted across southern Alberta in commercial canola fields.

Evenden’s research team noted that canola yield reductions can be substantial in DBM outbreak years and may indicate high DBM larval densities per plant. Nominal thresholds tend to be conservative in most cases and are not necessarily based on pest density variations.

The beneficial insects who either predate or parasitize DBM in this study included:

Evenden’s study is the first of its kind to provide quantitative estimates of individual consumption (feeding) patterns of several predatory and parasitic species of DBM in canola, using mechanistic consumption models. Findings related to this work included:

Generalist parasitoid has an instar preference

Functional response of parasitoids of DBM

In this study, the general shape of functional response did not change with the exposure period. Attack rate did not differ significantly, however handling time differed significantly to each other. More specifically:

This research study provides the first-ever report of non-consumptive effects of the C. septumpunctata predator’s presence on DBM and its interaction with plant host (canola) quality, based on the level of fertilizer that was provided to the plant. Different life stages of the predator (larvae or adults) were used to test DBM larval survival, growth and leaf consumption.