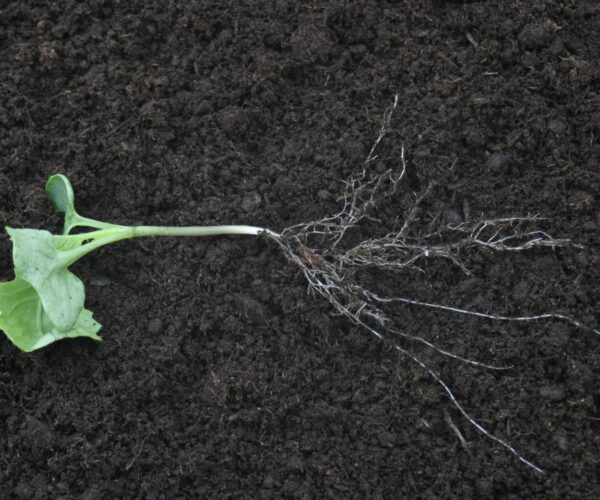 A good seedbed is important for germination and emergence and a plant’s root microbiome may also be important for nutrient cycling and plant growth.

Dr. Chantal Hamel was interested in exploring plant root microbiomes because under favourable scenarios microorganisms have potential to improve soil fertility, plant health, the efficiency of fertilizer, and crop productivity, resulting in greater profits. One of these scenarios could be an optimized rotation to maximize beneficial microbiomes. There is also potential to produce inoculants containing beneficial microorganisms adapted to living with roots that could protect crop plants against pathogens, or to biologically fix dinitrogen (N2) into plant available nitrogen.

Greater knowledge of root-associated microorganisms could also improve monitoring the presence or abundance of microorganisms influencing the health, performance, and productivity of plants. This could, in turn, support the development of improved cropping systems, cropping practices, and potentially even better cultivars, which can all support the sustainable intensification of canola production.

Objective 1: The research team described the canola root microbiome as influenced by different rotation systems and time, on a Brown and a Black chernozem soil.

In accomplishing this, the following outcomes were determined:

Rotation systems with most efficient nitrogen cycling in the canola rhizosphere

Objectives 3: To Identify the root microbiome taxonomic profiles and taxa related to efficient nitrogen use by canola crops.

As noted by Hamel, nitrogen in the air and soil can cycle through eight key inorganic nitrogen species of different oxidation states. The three major biological processes include N2 fixation (N2 reduction to NH4+), nitrification (oxidation of NH4+ to NO, NO2− and NO3−) and denitrification (reduction of NO3− to NO2−, NO and N2). Further details on this complicated cycle is covered in the final report of this Enhancing the beneficial root microbiome in canola study. See the nitrogen cycle infographic (pictured) for additional reference.

A range of microorganisms can impact aspects of this cycle, such as microorganisms involved in oxidizing NO to N2O in the soil and in reducing N2O to N2 (which mitigates the negative impact of denitrification on air quality). In addition, the abundance of microbial nitrogen-cycling genes is different in soil and roots and is affected by the identity of the crop plant. Therefore, nitrogen-cycling gene expression patterns in the root and rhizosphere microbiomes of five oilseed crops (Brassica napus, B. carinata, B. juncea, Sinapis alba and Camelina sativa) in three 2-year crop rotations (which included fallow, lentil or wheat in the non-oilseed year), were investigated in this study.

Results from this study indicated:

Objective 4: Evaluate the potential of canola root microbiome to provide canola with tolerance to abiotic stress and pathogen pressure.

The impact of canola-cereals-pea rotation systems (intensifying canola, cereals or pulse over four years) were tested on crop productivity, arbuscular mycorrhizal (AM) fungal diversity and community structure in the roots and in the rhizosphere of each crop, as well as pinpointed relationships between specific AM fungal microbiome members and crop productivity.

Key results from this experiment included:

Objective 5: Correlate the changes in microbial compositions with plant performance and rotational practices in order to improve understanding of the interactions between the microbial community and the plants.

Rhizosphere microbes influence one another, forming extremely complex webs of interactions that may determine plant success. Identifying the key factors that structure the fungal microbiome of the plant rhizosphere is a necessary step in optimizing plant production.

Key outcomes from these examinations included:

This ‘Enhancing the beneficial root microbiome in canola‘ project demonstrated that biodiverse agricultural systems improve agricultural productivity and climate management. It was determined that soil history was significant in structuring the bacterial communities when soil chemistry was highly significant (under the environmental conditions during this research). As well, Brassicaceae host plants were consistently significant in structuring the bacterial communities.

The outcomes contributed to a better understanding of canola microbiota which provides important information to improve canola yields and reduce greenhouse gas emissions by identifying the best rotation system that could potentially reduce nitrogen fertilizer use.

The study also provides the background information about the canola root microbiome that is fundamental for the design of microbiome management strategies to improve canola yield and health.

Further details on this research can be found in these resulting publications: