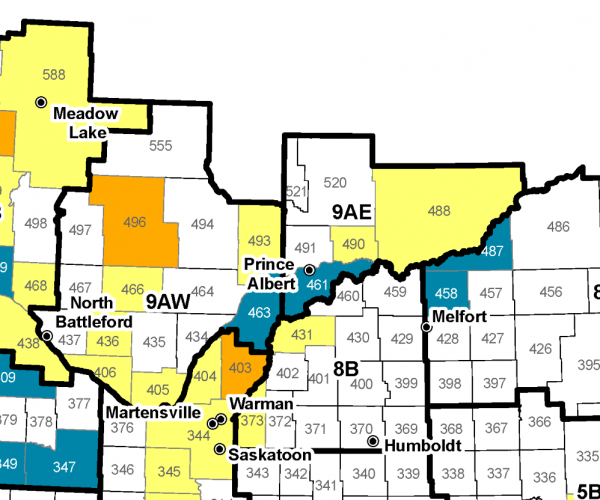 Crop disease surveillance is critical every growing season – both at the individual field scouting level and at the regional or provincial surveying level. While the Prairie-wide insect monitoring network equivalent for disease monitoring is still in development, there are many research projects and coordinated provincial efforts that take place annually to summarize the disease situation (occurrence, distribution and severity). This information can be used to assess the previous year’s management strategies and make improvements for the following season. When collected over time, these annual snapshots can also be analyzed for trends and considered for future disease risks (especially in neighbouring provinces, when distribution trends are increasing).

An informative pathology recount for the Prairies is available in this 2021 Oilseed Disease Situation Report from the Western Committee on Plant Diseases of the Western Forum on Pest Management. For a comprehensive recap of the disease situation in 2020, check out this annual survey report in the Canadian Journal of Plant Pathology.

While blackleg is a major disease of canola that is being monitored in each province, the focus is more on the prevalence, incidence and severity of the disease.

The latest blackleg updates from each of the Prairie provinces are represented below.

The Canola Research Hub contains 35 blackleg-related research projects you can check out including:

This Canadian Agricultural Partnership (CAP)-funded project led by Dr. Kelly Turkington aims to improve management practices for Sclerotinia sclerotiorum developing a better understanding of the relationship between inoculum availability and environmental conditions before and during flowering, and how this impacts stem rot risk and fungicide response.

The researchers are looking at factors (such as seeding rate) that influence crop development, as well as variability in flowering and the resulting fungicide efficacy at different canola growth stages. They will evaluate fungicide efficacy when applied as a single early application or as dual applications at different flowering stages, and will refine the use of qPCR analysis and investigate the use of spore traps to assess inoculum load before and during flowering.

The ‘Development of a biosensor for sclerotinia stem rot disease forecasting in canola’ project is another (CAP)-funded project on this canola disease which aims to develop an in-field real-time sensor to monitor plant disease pathogens, specifically the sclerotinia stem rot pathogens. The team plans to achieve this by completing these objectives:

For more information, check out the other 29 sclerotinia research projects on the Canola Research Hub, including:

The dry conditions in 2021 likely impacted the sclerotinia survey outcomes, including the Saskatchewan sclerotinia map pictured.

The ‘Clubroot surveillance and epidemiology: staying ahead of an important canola issue‘ project monitored clubroot infestations to see how prevalent it is in particular regions of Alberta, and how quickly clubroot is spreading. In addition, the research tracked the predominant pathotypes or strains of P. brassicae on the Prairies, and looked at whether genetic resistance was holding up in the field. Key outcomes from this project were:

Concerned about the spread of novel clubroot strains, the 3-year ‘Characterization of new strains of the clubroot pathogen in Alberta‘ project surveyed commercial canola crops in 40 Alberta counties and municipalities between 2014 to 2017. The research team found:

The ‘Development of a harmonized clubroot map’ project attempted to develop a Prairie-wide map. While the project did meet its objectives of examining the feasibility of a harmonized Prairie clubroot map, determining what such a map could look like, and communicating findings and recommendations to stakeholders including the Clubroot Steering Committee. It didn’t result in a three-province harmonized map.

The project lead, Dr. Stephen Strelkov wrote: “Despite the potential benefits of harmonized clubroot maps, the sensitivity related to this disease and its distribution may make their adoption difficult in the near future. This was highlighted in the current study by the difficulty in obtaining data from some provinces. Nonetheless, all provinces should be encouraged to continue record keeping and gathering data for the eventual execution of this map.”

The provinces each put out maps (nearly every year) of the clubroot situation. Here are the latest versions from each of the resulting maps:

To learn about some other interesting ongoing clubroot research, check out these newly-added projects:

Or check out the other 27 clubroot research projects featured on the Canola Research Hub.

In addition to showing support for ongoing disease monitoring efforts by providing access to the annual provincial disease surveys, scout your own fields, or your grower’s fields, with the helpful canola disease scouting guide, and use these blackleg and clubroot guides to help you manage these canola diseases.