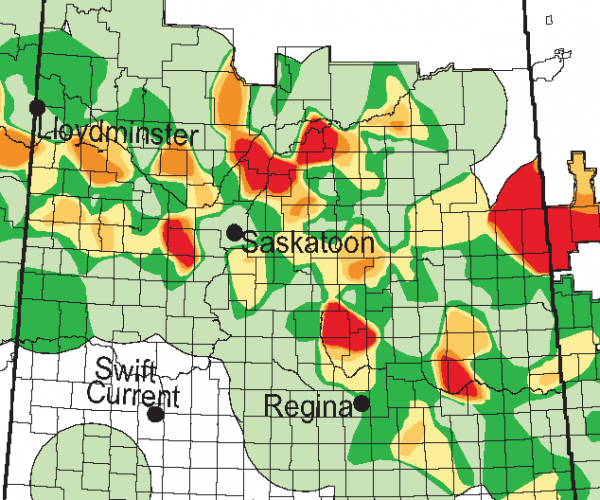 Pre-season preparations can include checking insect pest forecasts and considering management strategies that could be taken if those pests surpass economic thresholds. It can also be useful to review the survey results of insect pest populations and distributions from the previous growing season and plan out which pest surveillance efforts will be taken in the upcoming season. Fortunately, there are many provincial and Prairie-wide resources to assist canola growers and agronomists with this, including those covered in this blog.

The increase in canola acres over the last few decades have also increased the potential canola insect pest risks, as the crops provide a feeding opportunity for many insects. As stated in the Co-ordinated monitoring, forecasting and risk warning for insect pests of field crops in Canada report “when insect pest outbreaks occur in one area their impact is eventually felt across the entire canola growing region”.

This makes a regional pest monitoring program vital to keeping the agriculture industry informed of the risks to crop production from insect pests. Timely and accurate forecasts and risk warnings are a priority for decision-making and for implementation of commodity-specific risk reduction strategies.

Dr. Owen Olfert led a team of 11 researchers from across the Prairies on this collaborative project to:

A huge amount of useful population and distribution information was collected from this projects and some of it was summarized in the Prairie maps, which are available in this final report. Coupled with some climate models, their results also indicated that risks associated with canola pollen beetle, cabbage seedpod weevil and cereal leaf beetle will likely become more intense, both in terms of severity and in their ability to become established in areas where they do not yet occur.

Next, Dr. Owen Olfert and Dr. Jennifer Otani teamed up with a team 10 researchers from across the Prairies for the ‘Development of reduced-risk strategies through coordinated monitoring, forecasting and risk warning systems for insect pests of field crops’ project.

A vast network of approximately 5000 insect pest monitoring sites were set up by the excellent team of collaborators across the Prairie Ecosystem again in 2012. Effective insect monitoring protocols were created to ensure that best monitoring practices were used to produce the highest quality data. They continued to provide great value to subsequent entomology research and are hosted by the Western Forum on Pest Management.

To further develop assessment technologies and crop management tools for control of insects, weeds and diseases in canola and complemented the timely risk maps and warning efforts already in place, Olfert then led the ‘Detection, surveillance and management of weed, insect and disease pests that threaten the economic viability of crop production and the environmental health of Prairie agro-ecosystems’ project. This study accomplished its objectives of:

This project included some interesting findings about:

The success of the previous research set the stage for the ‘Coordinated surveillance, forecasting and risk warning systems for field crop insect pests of the Prairie ecosystem’ project which involved the formal development of the Prairie Pest Monitoring Network (PPMN) site, which  provides forecasts, risk maps, entomology research, and monitoring protocols for crop pest insects across Western Canada as well as free weekly updates throughout the growing season. PPMN also uses wind trajectory models to predict the arrival of diamondback moths (as well as aster leafhoppers) from their overwintering areas in the United States.

In addition to Prairie-wide collaborations, there are provincial insect survey efforts in Manitoba, Saskatchewan and Alberta that take place each year. Check out these monitoring outcomes and predictive forecasts from these provincial agriculture websites:

For those wanting to participate in insect monitoring efforts, here are some helpful resources and ways to contribute:

Learn some key conclusions from these other projects using insect monitoring and surveillance forecasting which are featured on the Hub: