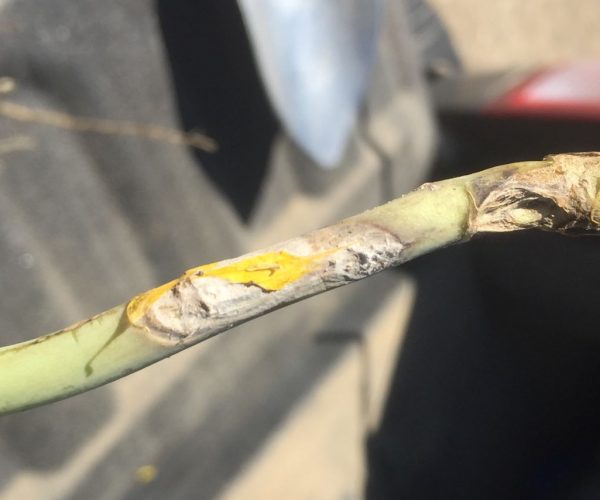 Sclerotinia stem rot is a plant disease that can occur in canola when conditions are favourable. As with all diseases, this happens when an appropriate host plant is present, environmental conditions are conducive and the pathogen is present (known as the disease triangle). In the case of sclerotinia stem rot, the pathogen is the fungus Sclerotinia sclerotiorum. It overwinters in the soil as sclerotia and germinates to form apothecia when conditions are suitable. The apothecia release ascospores into the air, which can subsequently infect host plants, such as canola, that it lands on. The resulting symptoms can include wilted leaves, lesions and premature ripening. New sclerotia – which look like small black cylinders- will form inside the stem. When the leached, brittle stems break open in the fall, the sclerotia will fall back to the soil to overwinter again. Read more about this disease cycle in the Canola Encyclopedia.

This disease can have a significant impact on seed yield and therefore affect a growers’ economic return on producing a canola crop. Since it is also widely distributed across Manitoba, Saskatchewan and Alberta at varying levels of incidence and severity, it is significant to a high percentage of canola growers. For this reason, improved understanding of both the pathogen and the conducive environmental conditions which allow this disease to impact canola is needed to better manage the crop with minimal economic loss.

The major in-season management decision growers need to make is whether to apply a fungicide or not (which can be assisted by reviewing a sclerotinia risk assessment checklist). Once this is decided, timing of the application is crucial (between 20 and 50 per cent bloom, with optimum timing typically around 30 per cent bloom) to maximize its impact. However, to make better risk assessments of whether a spray application is warranted or not, improved prediction models are needed. Despite significant research, these models have been difficult to create, due to a lack of strong relationships between environmental conditions and resulting disease impact. Some projects which have tried to address this challenge from various approaches include:

Since the fungus Sclerotinia sclerotiorum can impact all broad leaf plant species, and Canadian farmers grower many different crops on the Prairies, Harding’s ‘Improving sclerotinia disease control in edible beans and canola’ considered management for two commodities. The project examined whether there is a benefit from a micronutrient and a sclerotinia fungicide combination on bean white mould and sclerotinia stem rot management for canola. Fluazinam activity was the most responsive to the micronutrient tank-mix in reducing S. sclerotiorum biofilm. However, while the effects of tank-mixing of some micronutrients with fungicides were easily measurable, and statistically significant in laboratory testing, their efficacies in the field were often not discernible due to low disease pressure and other variables that could be controlled in the field. As a result, any consistent beneficial effect due to tank-mixing fungicides with micronutrients could not be confirmed in the field trials.

Canola breeding is also being used to develop genetic resistance to sclerotinia stem rot disease. This includes many interesting discoveries and developments, such as:

Researchers continue to build on findings from all of these previous studies. They further investigate aspects of this disease in these projects, which are currently in progress:

More sclerotinia studies, or research on other canola diseases are available on the Canola Research Hub.