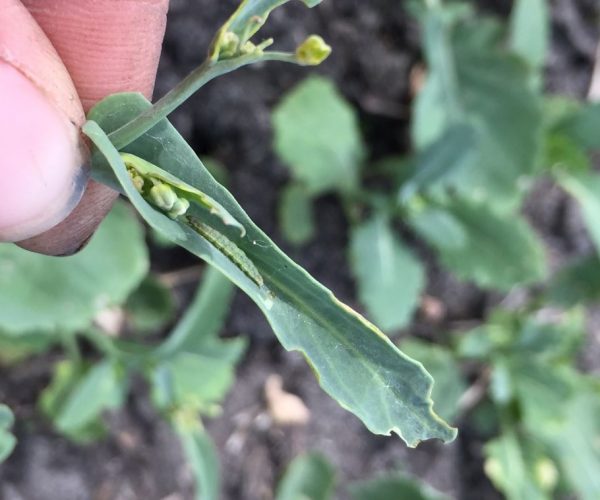 Insect pests can easily gain interest in years when populations are higher and more damage is being caused to crops. However, understanding the factors contributing to lower populations may be just as important, since manageable populations are the scenarios that growers would prefer to maintain. This article considers some of the parameters which contribute to diamondback moth populations in canola in the Prairies.

Diamondback moths are a common pest of canola, which feed on green canola plant tissue in their larval stage. As adults, they feed on the nectar of flowers (which causes no damage). However, the adults are actually present before the larvae. This is because diamondback moth adults utilize wind currents to migrate up to Canada in the spring. For this reason, wind trajectories are monitored as a way of predicting populations. Read more on this and see related maps from the Prairie Pest Monitoring Network.

Once on the Prairies, diamondback moths will lay eggs. The larvae that emerge from those eggs will begin feeding on various brassicaeous plants, such as mustard and canola. They can remain for up to four generations, which can overlap in their four life stages (egg, larva, pupa and adult). Modelled diamondback moth generation maps (such as the one pictured) can be found on the Prairie Pest Monitoring Network.

Several investigative projects have been conducted in the Canadian Prairies to better understand these pest insects, in order to better manage them in the field. Some of the interesting results which have grower management applications are described below.

Dosdall’s research involved surveys in Alberta and Saskatchewan (in 2010-2012) of this pest insect and parasitoids which attack it. They found that the main parasitoid species attacking diamondback moth on the Prairies are Diadegma insulare, Microplitis plutellae, Diadromus subtilicornis, and Cotesia sp., believed to be Cotesia vestalis (of the family Braconidae). The discovery of this Cotesia parasitoid was exciting, especially since this species appeared to be responsible for a substantial level of the total parasitism of diamondback moth.

To see the life cycle of a typical braconid wasp (a wasp from the family Braconidae, such as Microplitis plutellae or Cotesia vestalis) interacting with canola, check out this CCC illustration.

Regarding habitat, it was proposed that growing season temperatures in North America are not limiting factors for the development of either diamondback moth or the parasitoid D. insulare, based on findings from Soroka’s research.

For more on this study, see the project summary. More diamondback moth management and control options can be found amongst these recommendations for growers.

For more information on the role of key insect predators on insect pests in canola, check out:

Browse the Canola Research Hub for research on many other pest and beneficial insects impacting canola production.